Going back a few weeks ago, my friend asked me if I knew of any artists who have used men in their artwork, and this sparked a hunt for just such a piece. I found a few and published at least one for Pic of the Week, but during this I completely over-looked and forgot about my all-time favourite. Again, it's by Luis Royo, and it's a piece I have adored for some time now . . . 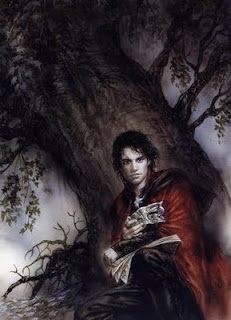 Exercise: You wake up and find yourself . . .

It's been a while since I last posted a writing exercise, so I thought I'd dig out an old one for you.

With this one, we each got given a random location, and the situation was `what if you woke up and found yourselves there`.
Exercise: You wake up and find yourself on a shop floor in the High Street
The voice brought me slowly to consciousness. I could hear it, the low, grumbled tone that vibrated through my head, but the words were a mystery. What was he saying? I couldn't tell.
Painfully I opened my eyes. The bright strobes from the ceiling above me were the first things I registered. The second was the blinding pain that shot through to the back of my skull. Squinting, I groaned and rolled over.
"No sale! No sale!" cried a second voice, the words gradually becoming coherent. "No sale!"
No sale? Where the bloody hell was I, and why wasn't I at home where I was supposed to be? Deciding to try again, I dubiously opened my eyes, expectant of the pain. It didn't catch me off guard this time. Two men stood over me, both Indian. One spoke in a language that baffled me. Obviously it made perfect sense to both him and the listener, but not to me.
"No! No sale!" the listener continued to cry.
Whilst the first man argued his point with what sounded like urgent need, I pushed myself into a seated position and looked around. Suddenly I knew where I was. I was lying in an aisle of a shop, one of many that lined the High Street.
What was I doing here?
Looking up, I saw both men staring at me, as if my movement had brought my presence to their attention.
"Sir," the listener shrieked in my direction. "Tell him no sale!"
"What?" I stammered, blinking.

"No sale!"
Again the first man waffled on as I continued to look around. Eventually my eyes brought my body to my attention. I was covered head to foot with little yellow sticky price tags. They were stuck all over me and each stated £3.50. I looked back up at the men confused.
"Sir! Tell him `no sale`! He want to buy you for thwee pound fifty! I say him no sale! No sale!"
Posted by DRC at 06:20 No comments:

Surfing through the net, searching for some inspirational art to feature on Pic of the Week, I stumbled across this website. I haven't had time to give it a good surf yet, but noticed there were some fantastic pieces published here. On the right hand side, after scrolling down a tad, you will see a list of featured artists. If you like your art almost as much as I do, then it might be worth your while to have a quick browse. I will definately be going back . . . 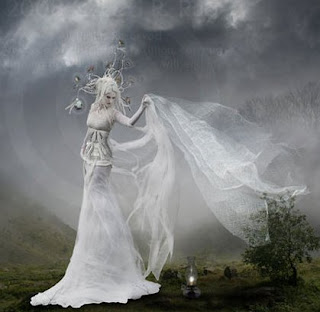 I've just been attacked by a bug. It's supposedly called a `Seasonal Bug` but I didn't feel any of its joy - I'm not quite sure it even had any!

No one likes getting ill, and I don't wish this little bug on anyone. It was a good`un! It was mainly a head-cold that made your head feel like all it wanted to do was explode. It wasn't a good feeling.

Reading one of the blogs I follow, I also discovered that she has just suffered from the same, and stated that head colds and writing just don't mix. And it's true - it's so true. It cloads your mind, and the only thing being created in your head is mucus . . . yuk! Unfortunately she was working to a deadline, and just finished short because of it, bless her.

Luckily my novel is finished and I am waiting for the critique, so there hasn't been need for much creativity to take place. I have, though, just started to edit a previous novel. It's a pretty good fantasy story, but badly needs a hair cut as a lot of it is needless dribble. It'll keep me busy until my critique is ready though. . .
Posted by DRC at 06:14 No comments: