A Visit From The Night Terrors...

I think I had my first brush with sleep paralysis last night. Somewhat of an interesting experience.

For those who don't know, sleep paralysis is a common thing. Some people experience it every night, but some will only have it once or twice in a lifetime – or even none at all.  It's happens during REM sleep (rapid eye movement) and in a nut shell, is where the brain comes into semi-consciousness but the body remains in sleep mode.  Because of this, sufferers feel like they're paralyzed with a crushing pressure on their chest, making it difficult to breath.  This is basically where the body is still shallow breathing, something it naturally does during sleep.  And because the mind is only semi-conscious, it brings forth elements of a dream state, causing hallucinations such as demons sitting on your chest or evil presences in the room.  It's all interesting stuff but at the time it's utterly terrifying. 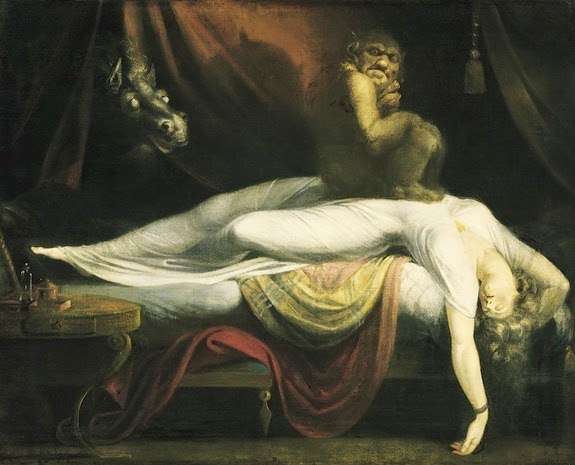 I've read a lot about dream paralysis- or the Night Terrors - and even used it in a short story, but I've never experienced it - until last night.  At least I'm guessing that's what it was.

I woke up during the night to a pitch black room.  Usually my alarm clock is bright enough to fight back some of the shadows but last night it was switched off.  My cat, as usual, was lying on my pillow next to my head, purring away, and I was on my back with my arms up, my hand stroking her.  But there was something else on the bed with us.  For some unknown reason I believed it was my parent's little dog, a yorkshire terrier, and I could even see him in the shadows.  At first he was standing over me, wagging his tail, and I'm not sure whether I actually moved but I thought I reached out to stroke him and he moved away from me, just out of reach, and passed his attention to the bedroom door.

That's when I felt completely terrified.

I felt that something was outside in the hallway.  The hallway looked slightly illuminated - probably the moonlight through the window - and something was there.  It felt evil and I honestly thought someone had broken into my house.  Then I saw a shadowy figure walk by.  I could have screamed.  My other half works away and I was alone in the house.  The little dog was still wagging its tail at the door and my cat - a very real cat - was still purring at my head.  But instead of getting up and hiding - or fighting or doing whatever else you do when you realise someone is in your house - I thought the best thing to do was to close my eyes and don't look.  Just pretend I didn't see it and pray that it didn't come into my room.

I have some pretty vivid dreams, and nightmares rarely scare me, but last night!!!  I've never felt so terrified.  And if it was indeed the night terrors, I know there's a reasonable, scientific explanation for it, but I can't seem to shake this slight feeling of dread about going to sleep tonight and it happening again.

Has anyone else experienced sleep paralysis?