I'm not guaranteeing that I'll get to blog between now and the New Year - busy days ahead, but who knows I may find time.  If this is the case I couldn't see 2012 through without one last Pic of the Week.  And it's a festive one too.

The artist is Garry Rowe from Glasgow, and the instant I saw this picture I knew it had to be posted.  It's moody yet festive, calming yet charming...

So to all those out there who are still hanging around after my disappearance, I wish you a very merry Christmas. 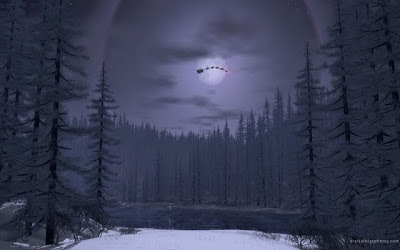 This Hiatus Must Surely Be Over...

It's been a rough few months over here in windy, rainy, snowy England (with a few sunny spells in between) but things are looking on the up now.

It's been...how long since I last posted?  But it hasn't been uneventful, I can tell you that.  Lets see...

1: I lost my job.
2: My husband had an accident at work which resulted in a shattered wrist, 2 operations, endless physio (for which he's still undertaking) and over two months off work, causing him to climb the walls and rip his hair out.
3: Both of the above resulted in huge financial worries and the pressure to find another job alongside nursing a very sorry-for-himself other half.

All of these has resulted in a decline in creativity.  Whereas my hubby has been climbing walls in frustration at being at home and unable to do much for himself, I've been going through the same process because my creativity has had no chance to flourish.  I NEED to create.  I NEED to write.  Even though I've done little bits here and there in between times, nothing has been what I call, progressive.

On the other hand, Starfish Publishing held a second book launch on November 24th (25th??). There were numerous books being launched into the big wide world of Amazon, and many took advantage of the new CreateSpace option, which allows authors to publish hardcopies on a print-on-demand service.  For those who have dreamt of seeing their work in actual book format, this service is amazing.  However, it also has its drawbacks which I will go into at a later date (ensuring I come back to post again).

The launch went really well and we raised £230 with 15% going to charity.  Well done everyone!

I included a book in the launch too.  I'm sure I've blogged about it in the past, but I'll plug it again.  It's a collection of short horror stories and is titled 'A Bribe For The Ferryman'.  So far I've have a few good reviews from readers (not from Amazon though) and managed to prove to people just how sick my mind can be...mwah-ha-ha-ha.

So, now things are beginning to look up.  I have myself another job (a good job), my husband is on the mend and has gone back to work on light-duties.  My financial worries are smoothing over and slowly but surely I'm feeling that creative spark re-ignite.  Thank god for that!!!!

All I need to do now is get myself back into a blogging routine.  I'm working on it, people.  Honest I am :)