I Just Watched The Dark Crystal: Age Of Resistance...

I guess the title of this blog post kind of gives it away but guess what! I just watched The Dark Crystal: Age of Resistance on Netflix and Oh My God!!!

I remember watching the original film when I was young and it scared the living bejesus out of me. I never saw it again because of that, but then just as the age of DVD's starting dawning, I saw a copy of it on a trip to Switzerland and had to buy it for old time's sake. Unfortunately I had no idea what area codes were on DVDs back then so when I got it home to the UK I couldn't watch it. I was so disappointed.

Then Netflix announced they were making a prequel as a series, and with it put the original up, so I was there. I love the original, with all its Gelflings and Skeksis, and it was no where near as scary as I remember, but then I'm not six years old anymore (I don't actually know how old I was when I first watched it, but know I was fairly young - born in 1980). Yeah, it's full of your typical tropes, of chosen ones and prophecies, but it was released back in 1982 when those things probably weren't considered as tropes, and the whole thing is so endearing. And the puppetry design by Brian and Wendy Froud is brilliant

I've always been a big fan of Brian and Wendy Froud, and not just because of their work on the Dark Crystal and, of course, the Labyrinth with David Bowie (their son, Toby, played Toby in this film, in case you didn't know). Back when I used to blog Pic of the Week every Friday, I featured Froud (here) and was absolutely thrilled when they left a comment. I felt like I had been contacted by an A-lister! It seriously made my day.

So anyway, the fabulously talented duo were back doing what they do best on the Age of Resistance series, and wow. Just wow! They kept the puppetry work so don't expect any amazing Matrix CGI stunts but the work they put into it was amazing, and it still keeps the original 1982 endearing feel and all its charms that fans love so much - including me. I was blown away. And it didn't scare me this time :). Definitely worth a watch.

By the way, if anyone wants to by me a Christmas (or even birthday) gift, I wouldn't mind a little Fizzgig :) 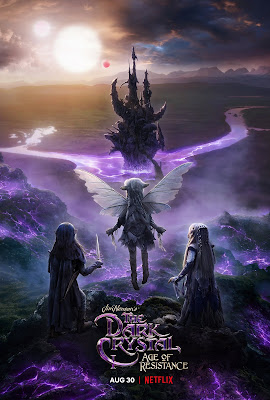