So, what does a writer do when they're not writing - or blogging? Well, watching a lot more TV, that's for sure. I've taken a very keen liking to the Netflix series Daredevil and Jessica Jones, and since finding out that the second series of Daredevil AND The Defenders, which bring them all together, are all on the cards, plus more, I'm am so excited. More time to spend not writing. Yay!

So what makes them different to the usual Marvel stuff that's out or in progress - which I also absolutely love? For starters, the writing. I don't know how they do it, but at some point they make you start routing for the bad guy - and you don't even realise it until you find yourself wishing they could have their happy ending (and question what the hell you're doing!). But in the words of Wilson Fisk, "Not everyone deserves a happy ending."

This week's Pic of the Week goes to NLMDA for his mind-blowing depiction of Charlie Cox as Daredevil. So go check out his other awesome pieces on his Tumblr website or like him on Facebook (which he deserves). He also does commissions too if his work can sway you.

A Front Cover Of Inspiration . . .

Where has 2015 gone! One month left and I can probably count on one hand the amount of times I've blogged.

A lot has happened since I last visited - some good, some bad. The worse? My feline friend, Daisy, passed away. To say I was heart broken is an understatement. I was ridiculously attached to that cat so it's no surprise I took it hard. BUT, I now have not four, but eight little paws pattering around here now. 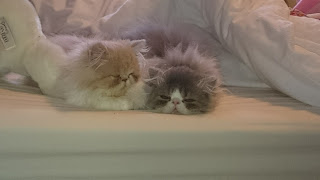 Meet Doyle and Bodie, two of the most handsome brothers I know. They're 5 months old now and such joys to have. And I'm now lucky enough to be working full time form home so I'm thoroughly enjoying their kittenhood - even if I do have to battle for rights over the laptop.

The flow of creativity is still strangely slow. I really need to buck my ideas up to get over this lull. I'm not sure what it is - a mixture of laziness coupled with anxiety maybe. Who knows. But it has to come to an end sometime. So here's a short piece I wrote the other night for a small exercise in hope that it would get those juices flowing again.


A Front Cover of Inspiration

Writing Exercise: We took a random book cover and let the inspiration flow, to see what it spoke to us. The Book? Under the Dome by Stephen King. 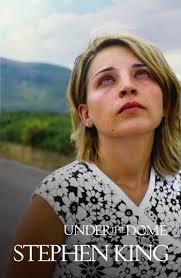 Out of everything, the one thing I wish for most is for the heat to go. The sun bears down on me continuously. I see clouds but they provide no shade, and the more I look at the them, the more I'm convinced they're not moving.

I don't know where I am. I know I've been here for a long time though. The straight road runs for miles ahead of me, and as I turn, it runs for equal miles behind, splitting though the mountain range on the horizon. The hills in front aren't as severe in sight as the mountains, but they're still menacing.

I honestly don't know how long I've been standing on this road. Definitely not days or weeks. Years? I can't tell how many. It feels like an eternity. I feel I should be old now, but I'm still the same twenty-four year old I was when it happened. I'm talking about the accident. Memories of it are few and far between but I do know that it happened quick. One minute I was reaching for a bottle of water sitting on the passenger seat of my car, the next I'm peering into the piercing eyes of a wild dog, followed by the sound of shattering glass, crunching metal and a blinding white light. That was it. Now I'm standing in the middle of this road, in the middle of nowhere - alone.

Everyday I walk. I walk for miles. I look at the hills ahead of me and walk towards them. Maybe civilisation lies beyond those peaks, people who can help me, hot food I can eat and cold drinks - not that I feel hungry or thirsty any more. I long to see what lies over the horizon and I walk all day but it never gets any closer. And as if in mockery, the mountain range behind follows me, stalking me and matching my every step. They never shrink in size, never grow any further away, yet I walk from them every day.

I have even ventured off the road. I look to the flat horizons either side, littered with half dead bushes and dry, cracked dirt, but no matter how long or how far I stray, the tarmac road follows. It's never further than twenty feet behind me.

I don't know where I am. I don't know how long I've been here, and I don't know why I can't leave. In frustration, I yell at the sun above me, always glowing and never giving in to night. The days are one, the stars extinct. I hate it. Did I die in that accident? Is this purgatory or hell? Will I ever be able to leave?

But then as I walk the same tarmac I've trodden for what feels like an eternity, a strange feeling comes over me. Something feels different. As I turn back towards the imprisoning mountains, I see it, a ghost emerging from the heat waves off the road. A car, speeding along towards me, ever closer. After spending so long on my own, with not one living thing scampering my path, I begin to feel something I haven't felt for a long time. Fear...