I had such a fun weekend.

Saturday 25th October meant Zombie Evacuation Race for us.  It was a 5k obstacle fun run with a twist to raise money for charity.  I didn't run (have you seen me run?  I'd probably frighten the zombies away) but I did join the 200 odd zombie volunteers that plagued the route, leaping out and scaring the terrified runners trying desperately to keep hold of their life tags.  They each got five on a belt and we had to steal them.  If you had at least one left by the time you crossed the finish line then you survived.  Those with none were infected.

The whole atmosphere of the day was brilliant.  Even the people working there were in army gear and protective lab suits.  Everyone was friendly and we all got goody bags at the end of the day.  Everyone loves a freebie :)  There were four in our party in total; one runner (running by herself as her boyfriend hurt his back and so had to pull out last minute.  She was terrified) and the rest of us zombies.

There were different zombie levels you could choose from.  The LIMPERS such as those from the Walking Dead who limp around certain areas in order to make you jump, or the CHASERS from the likes of 28 Days Later and WWZ who sprint after you in the Fast Zones.  And then there were zombies in between.  I was a Gorger who mingled with the Limpers, and I claimed a place between a narrow section in the path.  I crouched beside a log and hung between a V-shaped tree in my blood stained PJs, reaching out for passer-bys, and because it was a narrow section they had no choice but to squeeze past me whilst giving off high-pitched squeals (and that was mainly the men).

Make up artists were available to give you the full effect and some people looked utterly terrifying.  It was a non-contact event but we were warned that occasionally runners get so involved and so terrified that their natural reaction may take over and they may hit out.  My arm was slapped out the way a good few times, but nothing major.  However, I managed to witness this fear first hand when a women saw me, screamed, and in an attempt to get out of my reach ran head-first into the tree opposite.  She collapsed in a heap in front of me and I had no idea what to do.  Luckily the person she was running with stopped and helped her, and I managed to find her in the medical tent after the event to ask if she was okay.  She was.  She had a slight concussion though.  However, one person obviously didn't think I was scary and patted me on the head as he run past.  I had to laugh.

The day was brilliant though.  I don't know about the US or around the world, but these events run a couple of times every year in the UK, and so if you're interested, keep an eye out on their website or like them on facebook for updates on when the next event is and then register.  I'm definitely signing up again for the next one.


I'm still scouting for photos but if you want to see more of the day, check out the Zombie Evacuation gallery here.

I recently went and saw Dracula Untold in the cinema.  As I've said many times before, I'm easily pleased when it comes to films and this one was no different.  It was darkish, gritty, and an enjoyable 90 minutes for me.

I've been intrigued with the idea of this film for sometime.  I've always held an interest in the historical element of Vlad the Impaler (and originally thought this film was his story) but it's more about Stoker's version and tells of how Dracula became the Lord of Darkness that he's now known as.  It mixes historical points, such as Vlad's brutal upbringing with the Turks, his protective rule over Walachia and Transylvania, and the raging wars that saw thousands impaled, with Stoker's fiction.  Even though I would have liked a more historical account, I wasn't disappointed with the mix of Stoker's vampirism.

A friend of mine wasn't too keen on seeing it, thinking what could they possibly add to the vampire genre that hasn't already been done and stretched to point of ridiculousness?  But she was pleasantly surprised.  There are a few elements within it that could easily be the usual vampire cheese (I won't give spoilers), but for the most part, it steered away from the typical.  I put this down to the historical element that lends itself to the story, no matter how accurate or inaccurate that may be.

Reading some of the reviews going around the web, not everyone shares my opinion.  Some reviews are absolutely dire, saying there's a reason why this story was 'Untold', but I have to think, does it really deserve something that low?  Ok, it wasn't the oscar-winning masterpiece that trailers often make films out to be, but it was far from wrist-slitting, awful stuff.  FAR from it.  There were points that could have been dealt with better.  I would have liked to explore the demon that gave Vlad his powers more, think Vlad should have had more interaction with him before making his decision that it was the only way, and would have liked to see his struggle coming to grips with the change.  I know the character was thrown in at the deep end and probably didn't have time to consider whether what he was doing was for the best or have time to learn about his new abilities, but he suddenly became master of his powers without having time to fully know what he was capable of.

Other than that, I LOVED the visuals with the bats, loved the settings and generally loved the film regardless of what others may think, and Luke Evans provided satisfying Eye-Candy in the form of a man torn between his rule and his family.  The only thing that annoyed me was a scene in the beginning where Vlad rides his horse away from the mountain - a horse that looked more like a Shetland pony than the impressive steed you'd expect the Prince of Transylvania to be riding...I mean, they could have at least measured for size before shooting.  It wouldn't have taken anything extra out of the budget. Jeeeez... 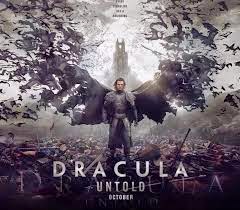 ON THIS DAY . . . (haven't done one of these in a while) in 1091, London was hit by a massive tornado, measuring T8/F4.  It's the first ever recorded tornado in the UK and destroyed churches, houses and businesses.  Even London Bridge, which was made from wood at the time, was destroyed. It's estimated that 18,000 people inhabited London at the time, all witness to the twister that tore through, and even though around 600 were left homeless, only 2 people were killed.

This fueled a tornado theme for Pic of the Week, and I found artist Mark Bryan whose work, I think, verges on a combination of reality vs dreamscape.  I really liked this piece for its imaginative simplicity.

You can see more of Mark's work on his website and prints are available to buy.

Enjoy and have a great weekend :)

Today I'm taking part in the Zombie Apocalypse Survival Kit and Crew Blogfest hosted by Mina Lobo at Some Dark Romantic, Jackie at Bouquet of Books and Dani at Entertaining Interests.  Go check out their blogs for more fun Survival reading.  I sure will be :) 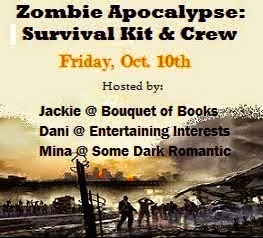 To create my dream team, I have to choose one for the following categories below, and be as creative as I possibly can.  Oh what fun :)

Anyone who knows me know I love a good film. I do. I can easily loose myself for a few hours whilst watching, no matter how bad (with few exceptions for the really bad…that’s just ‘slit-your-wrist-time’ painful). And I'm usually open-minded regarding remakes – although you have to admit, they are sometimes a mute point.

Ok, there's a whole new generation out there, some who wouldn't give an older film the time of day, and so remakes will often appeal more to them (and what they can achieve these days compared to the likes of twenty years ago can really make a difference) but if you're a fan of the original, then remakes aren't always a good thing.

There are three remakes in the pipelines that have won my attention recently, two of which could be good, but one with the potential of being disastrous.  These remakes are:

My all-time favourite is The Crow with Brandon Lee. It was one of the first films with an 18 rating that I ever watched, and was probably responsible the darker side of some of my thinking. I just fell in love with it right away. And the soundtrack, which I run out and bought on CD, is absolutely crazy with the likes of Nine Inch Nails and the Cure. For me, there wasn’t anything to not love about this film.

The follow-ons, however, I haven’t been too impressed about. City of Angels was not too bad. It wasn’t a patch on the first, and I’ve just watched Salvation for the first time. For me, Salvation was definitely verging on ‘Slit-your-wrist-time’ bad. What did they do!! The killed the Crow! As for the Wicked Prayer? I haven’t seen it.

Good thing about The Crow is that the franchise isn’t just about a specific character. It can be any unfortunate person who gains the power of the crow to seek vengeance on those who did them wrong, so the story lines can change, the circumstances can change, and the characters can change. They don’t have to make a 1994 reboot – and we’ve apparently been assured that it’s not going to be, so I’m quite hopeful. Let’s just hope they can get some actors who can act this time, unlike Salvation.

The other film was Ghostbusters.  Again, I'm a big fan of the original with Bill Murray.  And as a kid, not only did I love the film, but I recorded every cartoon episode and never missed one.  For me this could go two ways.  With new CGI technology it could be visually spectacular, but will my love for the first one give the reboot an unfair disadvantage?  We'll just have to wait and see what they churn out. 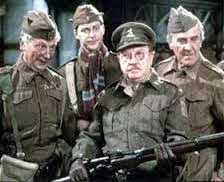 And last but not least, Dad's Army.  What are they doing?!!! What are they thinking?!!!  This, I think, will be disastrous.  Ok, they have a star-studded cast lined up with the likes of Catherine Zeta Jones, Bill Nighy and more, but come on.  Dad's Army?  Really?  Captain Mainwaring was only adored because of Arther Lowe, and then with the likes of John Le Mesurier, Ian Lavender, James Beck and Clive Dunn, the cast was complete and Dad's Army won it's place in the nation's heart.  You can't recreate that.  You just can't.  It's not like a film where people spend at most two hours and walk away thinking "oh, that's was good," and then look forward to reboot 10 years down the line  This ran for years.  We grew up with these faces, followed their characters and grew to know them.  They were known in every household and still are in many - such as ours.  You can't replace that, no matter how pretty Catherine Zeta Jones may be...