Today's Pic of the Week is something a little different. It's a raw graphite sketch, untouched by any digital remastering.

Does anybody know who the artist is? Any ideas? Oh, wait a minute!! It's me!!! lol 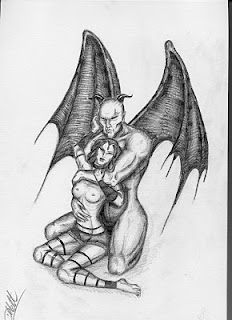 Have a good weekend everyone . . .

Just what is in a name?

For those planners out there, you can sit and ponder for hours over the construction of a piece. You plan right down to the last detail, every twist, every turn, every surprise. You even plan your characters.

If your anything like me, you want to get to know your characters as much as you can. I like to know what drives my character. Delving into their psyche can help with that. I don’t mean you should put as much planning into your characters as you do with the plot. Sometimes that’s just not possible. Sometimes a character unfolds as you write, and it isn’t until the end that you realise who that person actually is, but knowing a little bit about them prior to writing, I find, helps.

But then everybody’s different. There’s no right way or wrong way to write a story. What one person finds easy could be completely impossible for another. It’s like art. Abstract artists paint some wonderfully bizarre pieces. They paint abstract because they are comfortable with that style and they like it, but tell them to paint scenery or a renaissance portrait and they probably

couldn’t. It’s not that they can’t – you have to possess a certain amount of talent to put paintbrush to canvas – it’s just that they’re not comfortable painting that kind of picture, and it inevitably affects the end result.

I only need to know a small amount of my character’s psyche to be able to know what drives them. Take my more recent character, Blake, for example. He’s a cold person, and not many people in his town like him and tend to steer clear of him. But why is this? Why is he so cold? Well, looking into his past, his mother died during childbirth, and his stepmother also died when he was about 5. At that age he was old enough to understand the hurt that it caused him, and the torture it put his father through. From then he subconsciously became scared of letting anyone too close, fearing getting hurt again, and thus, making him cold and push people away from him. Just from this, you know Blake’s going to be a hard man, unsympathetic, uncaring, and the word `subtlety` doesn’t even enter his vocabulary.

Anyway, I’m rambling - but I'm a female and that's allowed. The `name` that I originally wanted to refer to wasn’t the name of a character. It was the name of this blog. WTF’s. What does that mean to you? “What the f…!”

Originally I started this blog so I could post the random (WTF) writings we do at our writers group, the North Herts Writers’ Circle. That was all. But, just like characters in stories, it’s taken on a life of it’s own, and no longer is it about random pieces. It’s evolved, it’s grown, as characters tend to do. So the title WTF’s, I feel, is no longer relevant. It’s time for a change – but subtle.

Incase you hadn't guessed, I'm also a bit of a film buff. I love a good

film - even a bad one if it keeps me entertained for an hour and half. I watch them for the enjoyment factor, regardless of bad script, rubbish effects or silly plots. Bad acting is an exception. There's only so much a person can take.
Anyway, I watched `Inkheart` yesterday. I've heard about this film, but not taken much notice. I can't remember it being in the cinema, and if it was, it must have been a flop because it wasn't showing for long. I did know that it involved books and reading, though. So when I saw the DVD on sale for £3 - yes, £3!!! - I nabbed it. If it was bad, I wouldn't have lost that much.
As it turned out, it was actually quiet enjoyable, and makes a great family film. Okay, the dialogue left a little to be desired, but that was over-shadowed by the story line. Brendon Fraser plays a man with a gift. Whenever he reads aloud, he brings the characters of the book to life, and the last book he ever read aloud was one called `Inkheart` nine years ago. It had disastrous affects that have haunted him ever since, and eventually they catch up with him for the dramatic climax of the film. Light hearted and enjoyable stuff.
One part really grabbed me. Paul Bettany plays a character called Dustfinger,

who is a flame thrower brought across from the book, and who wants nothing more than to just go back home. In one scene, he gets to meet the writer of Inkheart - the very person who created him. He was terrified at meeting him at first because he didn't want to know his fate. He didn't know how the book ended, and he was scared of finding out. The author, on the other hand, loved him and was so surprised that his character was everything he imagined him to be. As a writer, I sympathised with all of this, and it had me hooked.
It also had me thinking. How well do you know your characters? What would happen if you met them in the flesh? How would you feel? How would they feel? It prompted me with the idea for a writing exercise. It's intended to help practice the art of writing, and as a way of getting to know your characters better.

Choose a character that you've created, whether they're your favourite, your hero or heroine, your villain or your villain's henchman. Maybe they're a person you know really well, or a person you want to get know a bit better. Once you've chosen, imagine they become real - either through means of magic, science fiction, or whatever scenario your imagination creates - and then you meet.
As a writing exercise, how would you feel to meet to them?
As a character building exercise, how would they feel? What would they do? What would their reaction be? Would they hail you as their god? Or would they hate you, discovering that their entire life and all their tragedies has been created just for a good read?
Who is your character?
If you feel inspired by this little exercise, let me know the outcome. I'd love to read and view other people's concepts.
Posted by DRC at 06:14 2 comments: