It's been a busy week or so.  I've had an interview for what sounds like the perfect job for me (fingers crossed I get it), I've been to Devon for a loooong weekend to see the folks, I've completed another book cover . . . AND . . . I've completed two book trailers for Starfish Publishing's up-coming books.

The first is 'Warrior Heart' by Belle Noire, and the second is for my work, 'A Bribe For The Ferryman'.

Take a glance and see what y'all think :)

A Thursday Rant On Book Covers...

We've all done it.  We've all judged a book by its cover.  It's hard not to.  When you're shopping for a book, the cover is the first thing you see.  It's what makes you reach out, take it off the shelf and read the blurb to see if the story is for you.  The cover sells the book.

This is I why think the front cover for any book is important.  It needs to be stunning; it needs to catch the eye, and it needs to capture the essence of the story that lies behind it.


Since I've been designing front covers, this fact has started screaming at me, and I find myself taking note of other book covers, studying the detail and the message they portray - and there is some stunning cover art out there.

However, I've also found I'm now rather critical when it comes to this subject too.  I can't help it.  I find myself looking at a mediocre book cover and shaking my head, tutting and thinking 'I wouldn't have done it like that', or 'it would have worked better if...'.  Does this make me a bad person?  No, it's just my opinion, and I know my covers are far from perfect but it nerks me when someone is presented with a huge opportunity to do something great and spectacular, but instead comes away with a 'that'll do' attitude.  What a waste.


I have a little example here that's been bugging me.  Prepare yourselves for a little rant:

I'm currently reading 'The Emperor's Knife' by Mazarkis Williams.  It's the first book of a new fantasy series and I have to say I'm enjoying every word.  And what made me find this book?  Why, the cover of course.  It's stunning, it really is.  It speaks of mystery, of hidden secrets and dark shadows.  It really does stand out from its genre and was the reason why I picked it up in the first place.

Then I got it home and I studied the cover.  I'm being VERY picky here (that's actually an understatement), but here's a copy of the cover.  See if you can see where I'm coming from. 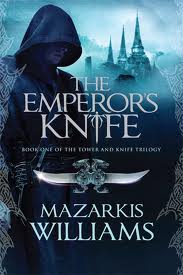 Do you see it?  I think this little detail may be hidden by the cover's overall magnificence.  So let me point it out to you. 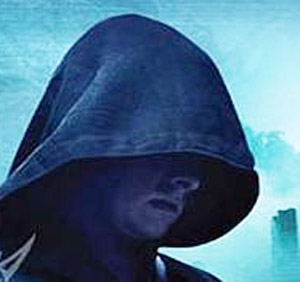 There, now you see it?  A saggy chin.  A god-damn saggy chin!  The hooded figure should resemble a man of mystery, a man who is dangerous and full of adventures.  For any romantic they should be tall, muscular and strong, handsome and rugged - not someone with a double chin.  This isn't how the character is portrayed in the story.  He's someone who's battled their way across desert, forest and city to fulfil his role as an assassin.  These people are lean and fit.  They wouldn't have saggy chins.

Here's another version of the cliched hooded figure.  This version is from Jon Sprunk's first instalment, Shadow's Son.  Now this is a man of fantasy.  He's handsome, rugged, dangerous - and LEAN! 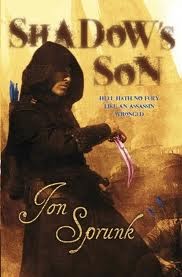 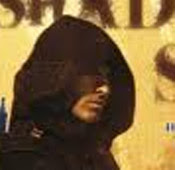 So to all you book cover designers out there, come on!!!  You have a chance to create something spectacular.  Why ruin it with a 'make do' attitude and let the whole thing down by a tiny detail that could have easily been remedied (photoshop works wonders lol ).  I'm not saying there's anything wrong with saggy chins, but when the picture on the front inaccurately describes the character from the story, it deserves a rant.

This is just a little thing that has bugged me since picking up this book and thought it needed to be aired.  This is in no way a review of the book itself.  So far, in my opinion, it's making for a fantastic read that I'm finding hard to put down.  This is Williams' debut novel and he's an author who has made it on to my 'look out for' list.  He doesn't mess aorund with his use of writing, which is good and I will be sure to check out his next instalment.  In fact, both the books mentioned here are worth your attention.  Go check them out if you haven't already.

The aim of this 10 minute exercise was to imagine what we would do if we were walking through a park and we saw someone sitting on a bench, someone we recognise, and someone, we suddenly realise, is wanted for murder.  We know the face from TV, from news broadcasts across the region.

So once we realise, what do we do?  How do we proceed with the knowledge that the county's most wanted man is sitting on a bench not two yards away as we pass by?

This piece was inspired by how I felt in a similar kind of moment a few years ago.  I'll blog about that one day too...

His gaze bor﻿e through me as I walked passed.  At first he was just a normal man sitting on the park bench, but as I drew closer I knew it was no ordinary man.

I had seen him before.  I even had a name for him, a name I had heard on TV, a name belonging to a killer.

Was it him?  My eyes wanted to study him as I approached but I was too afraid to look.  What if he saw me?  Would he guess that I knew who he was?  If he did, would he come after me to silence me?

Keeping my gaze low, I walked on passed, my legs quickening their pace without any command given.  They wanted to take me away from that bench as soon as possible.

He remained seated as I went by, but the fact didn't stop my heart from pounding in my chest.

What should I do?

If it was him, the police needed to be told.  If it wasn't then the man on the bench had nothing to worry about if visited by the police.  Surely, if it wasn't him, he must be aware of his striking resemblance to the killer?  He must be expectant of some contact with the police?

I needed to call them regardless.  I needed to get a safe distance away, take my phone from my bag and make the call, but my legs kept going and my arms remained stubborn in their swing.  They weren't going for my phone.

I'll make the call at work, I thought.  Safety in numbers.  I needed to talk to someone about it before I took that step.  Yes, that's what I needed to do.  Maybe then my mind's panic would settle and I'd see sense.  Maybe then I would realise that it wasn't him sitting on that bench at all, that my confused mind had only connected the two.  Yes, that made sense.  I didn't really have to make that phone call.  I didn't really have to get involved, did I?

Last week I published the front cover for an up and coming novel, 'Warrior Heart'.  This week I thought I'd go along the same lines and publish the cover for my own work, 'A Bribe For The Ferryman'.  It consists of 5 short tales of the macabre, the blood-thirsty, the terrifying and the down-right wrong.  More details of each individual tale will follow nearer the time.

'A Bribe For The Ferryman' will be published at the end of November under StarfishPC, along with other titles such as 'Apollo the Thirteenth' by Willaby, 'Book 1 of the Mad Worlds Trilogy' by L Godsave, and not forgeting, 'Warrior Heart' by Belle Noire.  Check out my new 'Book Covers' page to see all the book covers I've done to date.

It's all happening and you heard it here first :)


Enjoy and have a grand weekend... 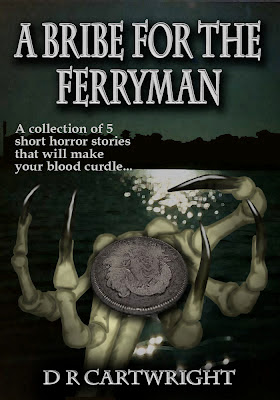 For those who were around last year, you may remember that we, as in our Writers' Group, formed a small Publishing Cooperative - Starfish PC - and held a book launch.  We launched three novels out into the great wide yonder they call Amazon.  It's been a learning curve, but since then we've learnt a lot more and are now planning a second launch this coming November (weekend of the 24th).

So far we have three more novels that will be set loose, a possible forth, and a collection of short horror stories (by yours truly :D )  It's all very exciting, and now the ball has just starting to move in regards to preparation.  Some of the preparations include finding a venue to hold the launch - something that is a must - and then the fiddly bits that follow.  These include book marks, fliers, adverts, yada yada, etc etc, but none of these can really be done until we have the all important book covers ready.

This task is down to me.

So I've put my thinking cap on.  I have provisional ideas for most of the books that are due to be launched, and these will be finalised in due course.  However, on Wednesday, I completed the first cover.  It's been given the go ahead by the author, and now the marketing for this book can really begin - starting with the book trailer that is also down to yours truly :) .

So here it is, a little teaser to wet the appetite and to feed the hoards that will be waiting for the stampede to buy it.  This weeks Pic of the Week is the book cover for the up and coming novel, 'Warrior Heart', by Belle Noire, a historical romance set around the era of the Knights Templar.

Enjoy and have an awesome weekend. 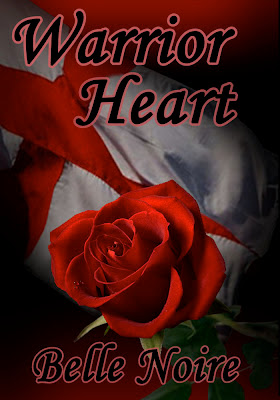