Before I continue, I'd just like to thank Ilima for the blogger award that she bestowed me.  It may seem like it but I haven't forgotten, and I will at some point get round to obeying the rules of this award.  Thank you Ilima.

This approaching Monday is going to be extremely interesting.  Our writers' circle is going on a field trip!  Yippee!!!  I'm stacking up on travelling sweets and snacks as we speak :)  One of our members is writing a historical romance that is set mainly around Avebury in Wiltshire (I love Wiltshire with all those hills and beautiful landscapes.  It's one of those place you know you're in as soon as you enter).  One location that Wiltshire is famous for, for those who don't know, is Stonehenge, but this isn't the only henge to grace its grounds.  Not far north is Woodhenge, and a little further north is Avebury, a small town built directly in the middle of yet another ancient stone circle.

We're visiting as not only will it aid our member by giving her a feel of the location for her work but it will also fill us with inspiration.  These ancient places are steeped with history, both fact and myth, giving them an air of magic that connects them with many pagan beliefs.  The whole area is magic in my eyes - and the atmosphere that hovers over Wiltshire in general is tranquil, majestic...and addictive, which is why I jumped at the chance for this field trip.  I'll give more updates on our trip next week.

In the meantime, and to celebrate our trip to Avebury, I'm revisiting an artist who, I think, is absolutely fantastic at capturing the wonder and tranquillity of such places in pastel, and this is the perfect opportunity to show you how inspiring locations such as Avebury can be.  The more I look at this artist's work, the more I fall in love with it.  The artist is Anne Sudworth and this is, indeed, 'Avebury'.

Have an awesome weekend and enjoy! 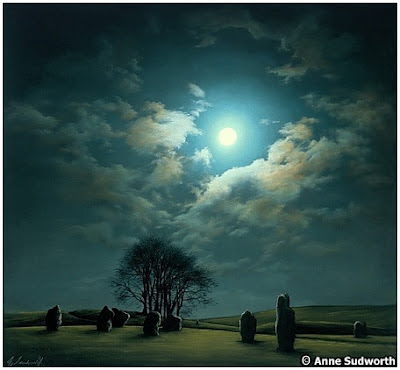 Do you know when you're walking down the street, passing shops you've never seen before, and then suddenly you see something that you just have to have?  I experienced that on my holiday.  I saw something and it spoke to me through the shop window.  It stared me dead in the eye and called my name.  The shop happened to be closed at the time and I had no choice but to go back to my caravan - but it haunted me all night.  It plagued my dreams and I could hear it crying out to me despite the miles that were between us.

Next day I ventured back to that shop during open hours and bought it.  So, what was this item that gripped me so?

It was this picture by Anne Stokes, titled 'The Oak King'.  But it wasn't just a normal picture.  It was a scroll that hangs on your wall.  I glanced it briefly whilst walking passed, done one of those comedic double takes and then spent the next ten minutes with my nose stuck to the window as I peered in.  It wanted to come home with me and I didn't let it down.  It's now sitting on my wall to the right, staring at me with content and I can't help staring back at it.  It captivated me and I hope it captivates you just as much (or at least understand why I was so easily pursuaded to part money for it).

So here it is, 'The Oak King' by Anne Stokes.

Enjoy and have a fab weekend... 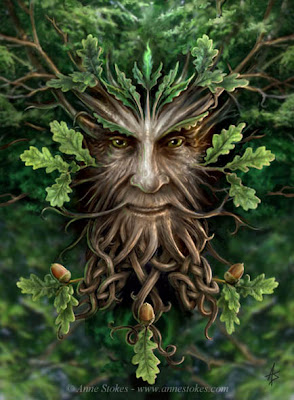 Back from holidays. And did we let the recent storms ruin our time? Never. We soldiered on like the proud holiday-makers we were.

Having said that, the weather wasn't too bad where we were. We had two full days of rain out of seven, and the rest was just wind (well, I say just wind; some nights we did believe our caravan was going to be blown over, not to mention the bowing walls). But at least we didn't find ourselves having to stand on a hill, watching as our caravans drift out to sea in flood waters like many suffered in Wales.


And at least we saw some sun. I even managed to get a little tan (or is this wind burn?)

Still, back to reality now, and back to blogging basics. Today I'm going to publish a writing exercise piece from last night's writers' meeting. The task was to write about a lunch break from your school days, and we only had ten minutes to do it.  And before you ask, yes this did happened  :)

As soon as the bell sounded we were out that side door, running passed the music block to a little secluded area that was almost out of bounds. A yard or so further and it would have been.

So what made this corner so special? The privacy it gave our group was one thing. It was well away from the main playground and the hoards playing football or tag. It was well away from scornful looks from those who flirted and guarded their targets like prey. It gave us the freedom to be who we were with our friends and to enjoy the hour we had outside class.

The second was the wind. It blew in from across the field and caught in the alcove we gathered in, creating a whirlwind that blew us around. Hours of fun was spent on windy days, seeing what could float on these up drafts and what could go the highest or the furthest.

One of these thing was a coat - a lightweight Naff-Naff jacket that seemed to be the in-thing back in those days. Of all the things we tried, from crisp wrappers to food, this was the one item that beat the lot, the champion, and the only thing to cause one girl embarrassment as she had ask the caretaker to retrieve it from the roof...
Posted by DRC at 10:16 6 comments:

I'm off for a week tomorrow.  Can't wait.  The only thing I'll miss, however, is writing.  We're going with a group of friends so I have to play a social role which means no writing.  I'll take quill and parchment with me incase I do find time...but it's not looking likely.  Still, it's a holiday.

This weeks Pic of the Week is from a unknown artist.  I couldn't find a name but I liked the picture.

So enjoy and I'll see you all in a weeks time. 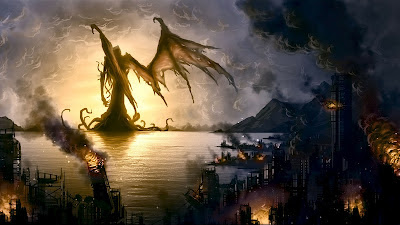