Pic of the Week . . . Benita Winckler

Another from the fabulous artist, Benita Winckler. I love her work so much I thought she deserved another viewing. 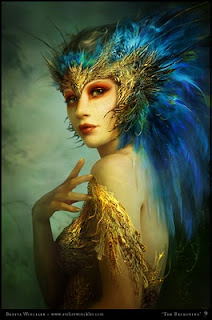 An Attempt At Book Cover Illustrations . . .

Yesterday evening, whilst waiting for our weekly Writers' meeting, I grew bored. I wasn't in the mood for working on my WIP, and there's only so much you can surf the web for. So I come up with something else to entertain myself with.
I designed a front cover for my novel. 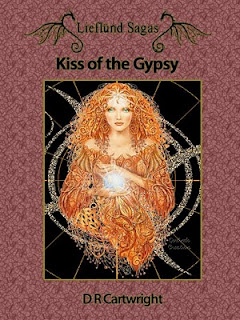 I know if - WHEN (keeping optimistic here) - I get published, the front cover design will most probably be taken out of my hands, but I still wanted to give it a shot for entertaining purposes. So, if I could design my own cover art, it would probably be something like this.
Of course it wouldn't be this exact picture. The art is someone else's that I found on the great wide web - it's just a shame I can't find the artist - but I can create something similar if I gave myself a bit of time. The main image portrays my female character perfectly - well, almost. She's a free-spirited gypsy with fiery red curls and green eyes. (The picture depicts more ginger hair and the original had blue eyes). But as a last minute find, I think it works great.
As for the Lieflund Sagas logo - Lieflund Sagas being my collective title - that is my own design (actually, I have this dragon tattooed on my foot) but this copy is a little rough around the edges and will need tidying . . .
. . . But as a first edition front cover, what do you think? I know they say never judge a book by it's cover, but would this entice you to buy???
Posted by DRC at 06:13 2 comments:

Pic of the Week . . . Benita Winckler

Brand new artist to the blog.
I stumbled across Benita Winckler and her work by accident during the week, and I instantly fell in love with it. Her work is stunning and possesses that soft hue that gives it an ethereal feel, while still being beautifully intricate.
Amazing . . . and I'm sure we'll be seeing a lot more of her work in the future.
(Despite the difficulties in choosing the right piece for this week's Pic of the Week, I had to go for this one, purely because of the kittens . . . bless) 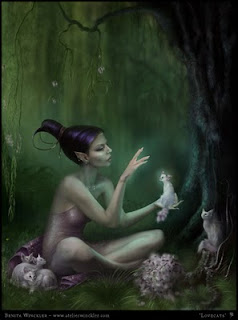 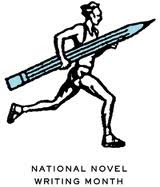 So who's taking part this year? How easy or hard are you finding it? Do you think you'll reach your goal of 50,000 words in 30 days?


I've never taken part in NaNoWriMo, and this year is of no exception - but that's not because I don't agree with it, as many people out there don't. It's just that I'd rather put all my strength and creativity into the piece I'm working on at the moment. If I have to write 50,000 words in a month, I'd rather it be on my novel and not something new.


And so I'm doing just that.


I love the hype that NaNo brings. Everyone who's taking part are all 'pens and excitement`. And their encouragement and enthusiasm is enough to spur everyone else on. Despite the fact that a lot of the work written may be dribble and complete nonsense, it helps prove to some that writing a larger scale piece is do-able, and if you adopt discipline, writing a novel is no longer an unachievable goal.


And so I'm taking part in my own little way. NaFinYowNoMo (National Finish Your Own Novel Month). I've challenge myself to write the remaining 10,000 words needed to complete my current work. My progress so far?


Yeah, you could say thing's aren't going too well for me this month (She says, holding her head low with shame). Still, there's the second half of November to work through yet. Things could still change . . .
Posted by DRC at 06:43 No comments: 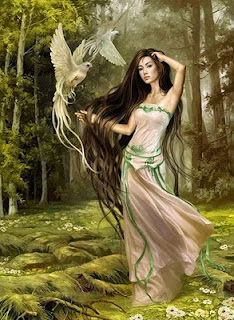 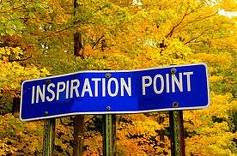 What inspires you? What gets your creative juices flowing? What spurs you into writing that best selling novel?

Everything and nothing.
It's a constantly asked question, `what inspires you?`, and most of the time it's answered by a shrug. It's something that can't be answered easily. It differs from person to person, and what someone may think is an inspirational moment may not be for another. This is just how the mind works.
Trucking around Scotland a few weeks back, I thought of a great little exercise, and made a little list of things I saw along the way - be it something on the horizon or something along the side of the road. They were mundane, everyday things, but managed to bring a little inspiration to the writers' group.
Exercise: An emergency phone on the side of the motorway hanging off the hook . . .
He pulled up on the hard shoulder of the motorway, bringing his car to a skidding halt. He was certain he would have caught him this time. He had been alerted of the call only a few minutes before.
A few minutes!
How could he not be here now? How could he have left already?
Opening his car door, he stepped out, conscious of the speeding traffic going by beside him. A mixture of emotions boiled inside. Most of all it was anger; anger at having missed his assailant yet again.
This was no mindless criminal he was chasing, and he only had a limited amount of time left to make the catch.

One sign that his assailant had been here was the phone that he approached. The receiver hung on its cable, swaying to and fro from the orange SOS box. A hunger lurched in him. He had been close to catching the man! He had been here, making the call that warned of the girl's death.
The man they knew as ` the GraveDigger` had no doubt given clues to his victims whereabouts, toying with the CID and enjoying their desperate anguish while the girl struggled to cling on to her life deep in an unmarked grave. She was the sixth on the GraveDigger's list of victims, and no matter how hard the CID worked, no matter how close they got to him, they had never caught him.
Today, however, they had been close. He was so close he imagined he could still smell the aromour of his assailants cheap, sour soap. He could feel the GraveDigger's fear of nearly being captured, never imagining the CID getting this close. It had thrown the assailant, had stirred things inside, and as the receiver was replaced on the hook, it still felt warm from where it had sat in the hand.
He looked around. The gravedigger was on foot, that much he knew, and there was only one way he could have gone without being seen. Up the bank.
Eager to catch his prey, he climbed up the bank with large strides. He had no idea what he was going to find at the top, was certain he wouldn't see his assailant running across the field - even though he hoped he would.
What he didn't expect once he reached the top was the sight of the slightly hunched man with the rifle in his hand. He didn't have time to dart out of the way, didn't even have time to scream in alarm before the deafening boom of the weapon blocked his ears - and he didn't even have time to feel the pain as he drew in his last, final breath.
Posted by DRC at 06:14 No comments:

I have to blog about this. I was well and truly impressed, in more ways than one.

As some of you may already know, not only am I a writer (or trying to be) but I also dabble in art. I have a skilled hand when it comes to drawing. This was why my brother-in-law enlisted me to help carve his pumpkin.

`But that's eaaaasy . . .` I hear you say. And indeed it is. Everyone who likes to celebrate Halloween carve pumpkins. But wait! There's more. Here are the reasons why I was impressed:

2: The pumpkin was no ordinary pumpkin. It was a monster - a big fat beast! In total it weighed just over 9 stone. It was HUGE! My sister aquired it from a friend which then lead my brother-in-law having ideas.

These are the reasons whyI was impressed. Take a look . . . 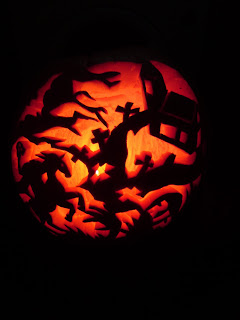 It includes a headless horseman, a church, numerous gravestones, a hand reaching out of a grave, and a bat. Here are some close ups . . . 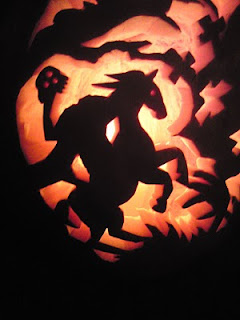 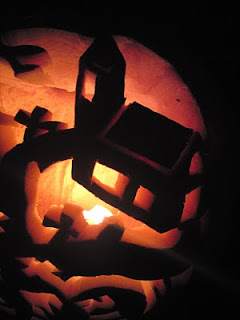 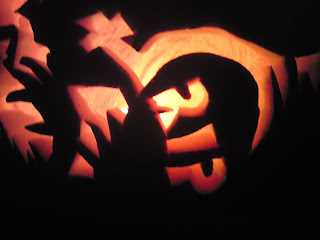 And the pumpkin, in light, leaning up against my sister's washing machine (Just to give you an idea how big it truly is) 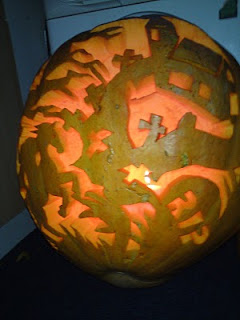