Continuing with the Edgar Allan Poe topic, a little while back we took up an assignment where we had to choose a historic person and write a little bio about them. Despite the fact we all write fiction, this was a great little exercise to see how well we write non-fiction incase we ever decide to broaden our horizons (Despite the fact I am now employed to do most of the web-copywriting for my company).

Anyway, as if by coincidence, I chose Edgar Allan Poe, done a little research, and this was the result.

“Quoth the Raven Nevermore…”
Once upon a midnight dreary, while I pondered, weak and weary,
Over many a quaint and curious volume of forgotten lore,
While I nodded, nearly napping, suddenly there came a tapping,
As of some one gently rapping, rapping at my chamber door.
"'Tis some visitor," I muttered, "tapping at my chamber door —
Only this, and nothing more."
“The Raven,” Edgar Allan Poe.
Edgar Allan Poe, born January 19, 1809 in Boston, Massachusetts, is

mostly remembered for his writing in the macabre, works that include titles such as `The Pit and the Pendulum`, and `The Murders in the Rue Morgue`. His poetry was just as dark, with pieces such as `The Raven`, as quoted, and `A Dream Within a Dream.`
He is also credited as being the inventor of the `Detective Fiction`, starring the fictitious C. Auguste Dupin and contributing to the growing world of Science Fiction. Sir Arthur Conan Doyle said of Poe, "Each of Poe's detective stories is a root from which a whole literature has developed. Where was the detective story until Poe breathed the breath of life into it?"
As well as his interests in Physics, Cosmology, and Cryptography, he was also a well-known literary critic, however this did not make him popular. A fellow critic, James Russell Lowell, described him as “the most discriminating, philosophical, and fearless critic upon imaginative works who has written in America.” His own work was often under such criticism also, often being described as “vulgar” and “too poetical”.
Despite his reputation, Poe’s writing career was successful, but the circumstances revolving around his personal life were not. In 1835 at the age of 27, he married his thirteen year old cousin, Virginia Clemm. Even though the couple were close, their relationship was often described as that of brother and sister, and the marriage was never consummated. A few years into their marriage, Poe was involved in a scandal involving Frances Sargent Osgood and Elizabeth F. Ellet.
In 1845 rumours of an affair between Poe and their friend Frances, a 34 year old poet, began to circulate. These were started by Elizabeth Ellet, who was said to have admired Poe and was jealous of his friendship with Frances. The rumours made it back to Virginia who had for some time been battling an illness. On January 30th, 1847, Virginia died of Tuberculosis, aged just 24, but upon her death bed it is said that she stated `Ellet had murdered her`.
Poe’s life took a downward struggle after his wife’s death. Even though some of his best works were said to be inspired by the tragic event, his behaviour became erratic and he developed a serious drink and drugs problem. On October 3, 1849, Poe was found on the streets of Baltimore delirious, in great stress, and in need of immediate assisstance. He was taken to Washington College Hospital and died on October 7, aged just 40 years old, and reputedly calling out the name Reynolds. The person to who he was refering to remained unclear.
To this day the cause of his death is a mystery. Speculation has included heart disease, epliepsy, syphlis, and even cholora and rabies. However, biographers state that after his wife’s death, he became increasingly unstable, and even though he had a further two relationships after, he still was not happy. They suggest that his frequent theme of the `death of a beautiful woman` in his works stems from the repeated loss of women in his life, which brings about another speculation that Poe, despite how cold and hard he was reputed to have been, and the number of enemies he made, merely died of a broken heart.
Posted by DRC at 06:06 No comments:

We set ourselves a little project the other week. We had to take a poem or the lyrics of a song, and convert it into a short story. 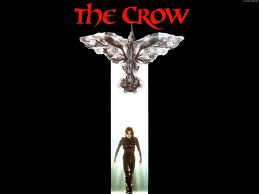 I'm no poet, and poetry doesn't hold much interest for me, BUT I do like Edgar Allan Poe. His poems are usually dark and sad (probably why I like them) and his most famous piece was `the Raven`, which inspired The Crow series, films, books and comics. I considered shoosing this, but then I decided against it. Instead, I chose`A Dream Within A Dream`.
A Dream Within A Dream
by
Edgar Allan Poe

Take this kiss upon the brow!
And, in parting from you now,
Thus much let me avow-
You are not wrong, who deem
That my days have been a dream;
Yet if hope has flown away
In a night, or in a day,
In a vision, or in none,
Is it therefore the less gone?
All that we see or seem
Is but a dream within a dream.

I stand amid the roar
Of a surf-tormented shore,
And I hold within my hand
Grains of the golden sand-
How few! yet how they creep
Through my fingers to the deep,
While I weep- while I weep!
O God! can I not grasp
Them with a tighter clasp?
O God! can I not save
One from the pitiless wave?
Is all that we see or seem
But a dream within a dream?

There was nothing I could have done. Everyone had told me. She had got it in her mind that this was what she wanted to do, and there wasn’t anyone out there who could have done a single thing to change it.

My love was like that. Stubborn. She had the kind of mind that when it was set, it was set in concrete. There was no dislodging it or dissuading it. It was made and it was final.

No one could have prevented what happened.

As I walked along the shores I pondered the question. My bare feet sunk deep into the wet sand every time they trod. I used to like the feeling. We both had spent hours laughing at the feel of the sand as it pushed between our toes. Now it was just me, and the sand was nothing but irritating.

I had often found inspiration as I walked along these shores. Those inspirations soon found themselves turning to words as I created stories of fiction. Sometimes I even cut our walks short so that I could go home and write. My love never complained. She supported me. She understood when I needed to shut myself away, when I needed to be alone for hours on end, hours that often turned to days.

She had always accepted this, and I loved her all the more for it. But did I ever tell her? I was sure that I had, on many occasions, but now I wonder whether it had been enough. I didn’t pay her as much attention as she needed, and I didn’t realise this until it was too late. The moment I walked into that room I knew. I knew what she had done and what had happened.

My world crumbled the instant my eyes fell upon the sight of her. She had been lying there a while, with me completely unaware as I worked in the other room. I had no idea. She had given me no clues, had shown no indication that this was what she intended to do. But then even if she had, would I have picked up on them? I was so consumed in my world of fiction that everything else was just a blur in my mind. She could have been screaming for help at the top of her voice, but I heard not a whisper of her torment.

On the surf tormented shores, I crouched. I watched the surf as it rolled in over the sands, reaching just in front of me before being swept back. I inhaled the saltiness in the air and listened to the hiss of the sand as the surf washed over it.

I had counted just six tablets from a bottle originally containing twenty that day, and my heart leapt with dismay as I realised where the other fourteen had gone. She had swallowed them. One tablet was enough to ensure you experienced a restful, uninterrupted nights sleep. Fourteen ensured you never woke. My love had wanted a restful peace that she never wanted to wake from. She wanted to live forever in her dream.

Reaching down, my fingers submerged themselves beneath the sand, each grain giving way to my presence. Curling my hand, I cupped a handful and lifted it from the shores, but no matter how tight I held them, I couldn’t stop the grains from falling through. It reminded me of ho 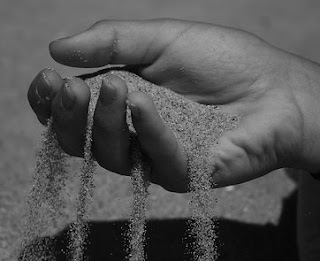 w I had let my love slip through my fingers with such ease. She could have been helped, she could still be alive, but the trickling sands continued to scream of my incompetence and my failure towards her.

As I watched the last of the grains fall back to the sands I couldn’t help but weep. 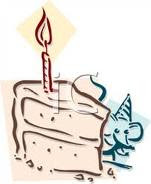 My first post was October 9th . . . today is October 18th.
So a happy belated bloggers birthday to WTF's!!! (WTF standing for Writing Thrilling Fiction, of course. What did you think? lol . . .)
And have I had a good year?
Well, I've enjoyed blogging, sharing some weird and wonderful amature fiction with everyone, as well as random posts and Pic of the Week, so yes. I've had a good year. I hope all readers out there have enjoyed it as much as me . . .
Posted by DRC at 10:18 No comments:

I've discovered a new artist (He may not be new, but he's new to me) and I feel blown away. His name is Ryu Takeuchi, and he specialises fairy art (I call him a he, but I'm only assuming here).
So what is about his work that I love?
Well, you can't deny that even from a distance it's eye catching. The contrast in colours are stunning (in these pieces. Others are fairly subtle), and I love the figures themselves, with their slender limbs and their curved stature. They're delicate and beautiful . . . and, what's more, it looks raw and not digitally remastered.
I love them, and it's because of this that I'm posting two for this week's pic of the week. I could have posted more, but I'll stick with two and keep the rest for the future.
I hope you enjoy them as much as I do. 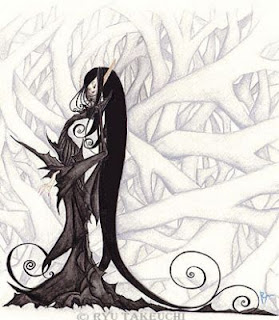 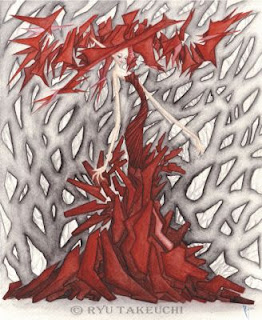