I finished watching Good Omens by Terry Pratchett and Neil Gaiman last week. I have to admit that I've not read much Terry Pratchett but I am familiar with his work, and boy! you can see it come through in this. It is very Pratchett-esque. And that's a good thing. It's light hearted and good fun and the chemistry between Sheen's angel and Tennant's demon is just divine!

However, I had to laugh yesterday when I read in the news that 20,000 Christians have petitioned for NETFLIX to cancel the show, claiming it is normalising Satanism, amoung other things. Now, I'm not against people airing their opinions - everyone has a right to - but I'm shocked that 20,000 people failed to spot their one blinding error. Any guesses what that error might be?

One of Neil Gaiman's responses to this on Twitter, which made me chuckle, was:


"This is so beautiful. Promise you won't tell them."

And even though there have been a few tweets regarding this since then, the tweet from Amazon Prime to Netflix was, I thought, priceless... 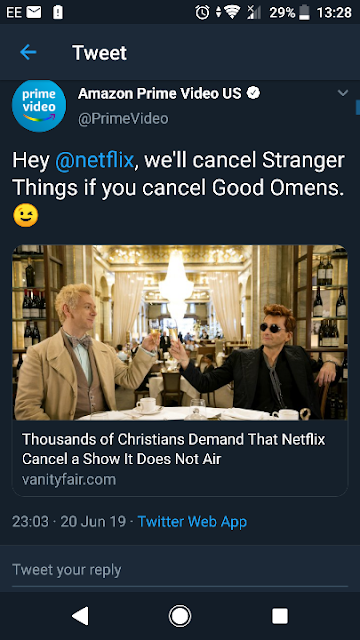