Sitting here thinking about my new WIP, trying to bridge gaps, etc, and I suddenly come up with a brilliant idea. It fits in so well with my whole fantasy series, especially with one of the main books that tells the tale of a major event in my world's history, 'The Calming Of Gorthian'.

So, what's this idea?

For years I've seen this but never really twigged what it meant. Recently I read 'Prince of Thorns' by Mark Lawrence and the art of necromancy plays an important role, and as I read the bridges between my gaps began to form.

So, for this week's Pic of the Week, I've chosen a piece called 'Necromancer' by an artist called Saryth over on Deviant Art. If you like this, check out his other pieces. You won't be disappointed :) 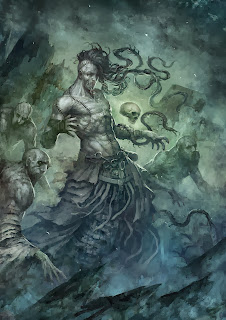 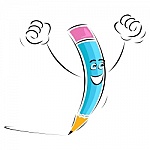 So, what was the other thing I needed to announce?  Oh yeah!

I finished my latest manuscript.

This piece has been somewhat interesting to write.  It wasn't that I had to do a lot of research in order to pull it off, it was the fact that it took me so long to finish - as opposed to the usual length of time it takes me.  This is through no fault of its own.  The poor thing wanted to be written, screamed at me and haunted my dreams, but I let it down.  I made it wait, and I think by the time the end come round, it had just run out of steam.

It took me just over two years.  That's outrageous for me!  Never mind the fact I wrote another novel and a collection of short stories in between times - that my life felt like it crumbled and was teetering on edges before slowly being patched together.  Taking over two years to write one novel is something I haven't done since my 'writerly pottering' back in the days of yore.

Since finding my comfort niche with my fantasy series, I've churned one novel a year, which I think is average when balancing work and social lives too, and it was something I thought to be good if I were to look at my writing seriously - producing a steady stream of work.  This one didn't turn out quite on time.

Then there's the fact that I broke my rule:  One novel at a time.  You need to focus, to get to know your characters and allow yourself deep into the story in order to get to know it well enough to do a good job.  For me, having a second project on the side - or even projects - broke the flow of things and had an effect on the overall outcome.

Anyway, my piece, Lady of the Seas, is finished - that is, the first draft.  Editing stages are well under way.  I feel a mile stone has been reached with this one, and there's been a weight lifted from my shoulders.  My characters are no longer screaming at me to finished their tale.  It's done.

And what does a writer do when it's done?  They start another one :)

What can I say.  It's been a while since I graced you with a post (feel free to slap me and punish me as you will) and whereas not much has really happened, when I actually think about it, there's been some pretty big things that do need announcing.  Why I've not done this sooner I don't know.  (That big, one-eyed monster called 'Life' has kept me locked up and has been feeding off my creativity, leaving me with not much to go around.)

The first big announcement is that I've been published!  Yes!  Not a novel, but a short story.

Before I went to New York (jeez, that was a lifetime ago - 4-5 months) I entered a competition called Fairly Wicked Tales, hosted by Angelic Knight Press.  The idea was to take a fairy tale and put a spin on it, for example, making the heroine the bad guy: Cinderella being a b@*!h to her two stepsisters, Little Red Riding Hood beating up that poor wolf, which in turn invoked it to savage her; you get the gist.  And because Angelic Knight Press deal with everything dark, the competition was right up my ally :)

I chose an almost unheard-of tale called 'The Glass Coffin' - and no, it has nothing to do with the glass coffin the seven dwarfs put Snow White in - although the Grimm Brothers did like their glass coffins.  It involved a hunter saving a brilliant stag from a bull, and in return the stag showed him the way to a hidden cave where a fair maiden was kept imprisoned in a glass coffin. The rest is nothing unusual; he kisses her; he rescues her, the stag transforms back into her brothter, they fall in love; live happily ever after...yada yada.

But then I twisted it.

The maiden in the coffin was a witch who needed the kiss and the heart of a man in order to break the curse over her and her brother - and when I say heart, I don't mean what someone gives as a token of their love.  I mean a real heart, still beating and full of blood.  It turns out the bull he killed in order to rescue the stag, her cursed brother, was the sorcerer charged with keeping their dark secret sleeping...and the disillusioned hunter slayed him and was then lead to his doom.

Worked well as a Grimm Tale, I thought - and others must have thought so too because it's now part of an anthology that's being published by Angelic Knight Press around Halloween.  What apt timing :)

I'll keep you all posted.

As for my second lot of big news (well, maybe not as big as this lot), I'll save that for another post.  It may help get me back into the habit :)