I have to share this blog with you. It's one of my favourite work blogs that I wrote about a year ago . . . and I think it's a shame that it's now disappeared into the deep blue depths of cyberspace.

Let me enlighten you on what I fill - or used to fill - my professional time with. I work for an internet retail company, and after they discovered my passion for writing, they handed me the company blog to nurture and nurse back to health after a slow start in life. (I can now call myself a web copywriter. I just love that title . . . lol).

But what they didn't bargain for was my creative juices. Occasionally they were flowing with a vengeance, and so on some days the company blog become slightly . . . fictional. But the challenge I loved was writing something fictional about a product we sold.

I've always had a love of the mythical legends of ancient Greece, and so when I decided to blog about our Hot Stone Massage Kits that we were selling at the time, I just couldn't resist it. And you know what? It must have worked because we soon sold out . . . lol. So now, presenting to you the creative selling post I once wrote. (The facts may not be quite true with the original legends, but when you only have a short section of time in which to write something, they were the best that I could remember.)

The Greek Legend of Hotstones . . .

Once, many years ago, there was a Seer, who foretold a tale of a brave young man who would travel the lands and slay the beast Medusa. Medusa was originally a beautiful woman who used her long tresses to woo and seduce men. Outraged that her temple had been violated, the goddess Athena set a curse upon her, turning her luscious locks into snakes, and making it so that if her eyes were to fall upon any man again, they would instantly be turned to stone. People feared this vile beast, and so preyed that the Seer's words would become truth.

One day, upon his travels, the Seer came across a curious young man, basking in the sun. This

man was called Iydalnis Basalt, and instantly the Seer saw his hero within, despite the sneers from his neighbours and rumours of his stubbornness and laziness. He tried to persuade Iydalnis that he had a destiny to fulfill, but all Iydalnis wanted to do was lay in the sun. Eventually the Seer had to resort to burning his home down on a quest to get Iydalnis into action, and it worked.

Together, Iydalnis and the Seer traveled across the land in hunt for the legendary fem-fatal, Medusa. Many adventures were shared, until eventually they came across the ruined temple where Medusa was said to reside. Iydalnis insisted on a sleep before entering to fulfill his destiny and slay the beast, but the Seer refused him, and so dubiously and lethargically, Iydalnis entered.

For an hour he silently scouted the ruins in search, and just before he was about to leave he saw her, with a head full of withering snakes. As he approached her from behind with his gleaming sword poised for certain slaughter, she turned to glare at him. Horrified by the sheer ugliness of the creature, Iydalnis froze in mid attack . . . and was turned to stone.

Yep, you guessed it. The Seer had been wrong. He should have foreseen Perseus slaying the beast instead of the lazy Iydalnis. 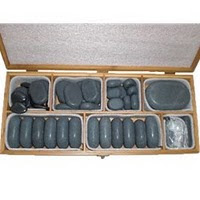 had ever seen. Eventually he called it Basalt stone, and that once heated, to get it into action, the lazy characteristics with which Iydalnis possessed would come forth. When placed on the body in certain areas, these heated up characteristics would transfer through the skin, and were found to be very calming and therapeutic - and before long these hot stones became famous throughout the world for their fantastic and detoxing relaxation methods.

A much plausible theory to believe as opposed to volcanic rock cooling and scientific blah blah blahs . . .
(Did you notice the name, Iydalnis Basalt? Hot stones are made from Basalt rock, and Iydalnis came from being bone idol and lazy - ie relaxing. Get it? lol)
Posted by DRC at 06:22