Exercise: I Suppose It Could Have Been Worse . . .

On Monday night we pulled out the ye-oh faithful word box. Inside is a collection of random sentences used to inspire. This is the consequence of the sentence I pulled out . . .

Exercise: I Suppose It Could Have Been Worse . . .
As the door to the partitioned gangway in front of the dungeon opened, the Duke of Dorset crawled from his dark, dank corner to see his visitor. "What happened? What went wrong?" he asked.
The man stumbled into caged gangway, helped by the forceful hand of the prison guard. "We tried, my Lord. The legions were in place. The attack went as planned, but there were just too many of them to fight." 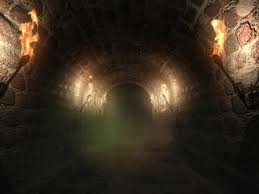 "So you failed?" The Duke's words drowned in the sound of the barred door being slammed and locked in place behind his visitor.
The man cowered to the floor and dragged himself over to the bars. Clinging onto them, he pressed his regretful, grubby face through and searched for the Duke in the darkness. "It wasn't our fault. We were misinformed. The information provided by the Duke of Buckingham was wrong. We didn't expect there to be so many Yorks."
The Duke sighed with frustration and slumped back into the gloomy shadows. "So King Henry still reigns."
The man tightened his grip on the bars, pressing himself against them as if hoping that he could pass through. "But my lord, word has spread that King Henry is of ill health and that he won't be seeing the winter through."
"And what good is this news to me?" The Duke sprung from the shadows like a demon. The man in the gangway recoiled with fright as the Duke's hand reached out for him. "Your rescue attempt for me failed. Even if King Henry were to die of ill health, what good is that to me when I am still locked in here? What good?" The Duke's fingers gripped tighter around the bars, wishing they were the man's neck.
"Well," the man replied as he made himself comfortable on the gangway floor. "I suppose it could have been worse."
The Duke's face twisted with rage. "Really? Pray tell."
The man gave a shrug. "You're being beheaded tomorrow. At least with you gone I'll be released and free to live as I please without the fear of you."
The Duke raised a single eyebrow. . .
Posted by DRC at 06:09