Since Tuesday's post were I offered the last scene from 'The Da Vinci Code' to watch if you were interested, I have still been in a Dan Brown mood and watched 'Angels and Demons'. This reminded me that art isn't just limited to Paint Brush on Canvas, but also in Sculpture.

I follow a couple of art blogs, one especially that focuses on some amazing scultpure work, and I really admire it because it's one thing that I've never tried.

Anyway, in the film set in Rome - for those who remember and those who haven't seen it - the character Robert Langford finds a sculpture of a being half angel and half demon. It's only there for a second, but it's a spectacular sight. I've since discovered that it's not an original Roman sculpture but designed and created specifically for the film. I love this piece. Here's a quick look at what the statue actually looks like in daylight.

And here is this week's Pic of the Week. 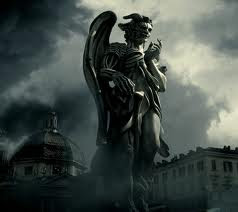