Seeing as this weeks blog hop took on a sci-fi twist I've decided to continue with that theme.

I'm not that clued up in Sci-Fi literature, but I've heard that the planet Saturn - or the image of a planet with rings - is very cliche.  It's been over used and has lost all originality.  But you know what?  Meh!  That's what I say to that.  I like Saturn.  It's the only planet in our solar system with a difference.  And that difference?  Yep, you guessed it.  Rings.

I love those rings.  And when you get a powerful enough telescope and actually get to see Saturn for yourself (I've only seen it this way on TV) it takes your breath away.  It really does.  I've seen Mars and Venus - and the moon pretty close up - but none has that certain factor that just captures you and mesmerises you.  It's those rings.  That's what makes it so special.

This week's Pic of the Week is Saturn, but imagine if this was a real photo.  Imagine if this is what greeted you every morning when the skies were clear, or at night alongside a full moon.  Wouldn't it be spectacular?  But then would we also begin to lose our love for it and take the sight for granted?

I'll let you decide that.  In the mean time, enjoy and have a great weekend. 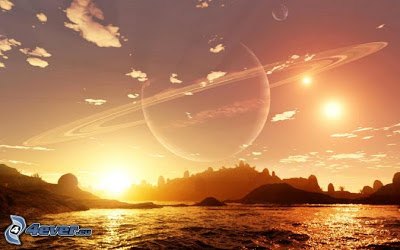