Last night the UK was battered by high winds - we still are today - and unfortunately it managed to destroy an oak tree in Pontfadog near Wrexham, North Wales.  It's said that their recent spell of heavy snow didn't help matters, and these heavy gusts last night were obviously the last straw for this tree and it sadly toppled over. 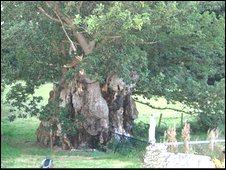 But this tree wasn't just any old tree.  With a girth over 42ft wide, it was apparently the oldest in Britain and has reportedly been there since the year 802, making this tree over 1200 years old.

If leaves could talk.  Imagine the history this tree has seen.  It's said that under this exact tree was where Welsh Prince Owain Gwyness rallied his troops in the 12th century before marching into England and defeating Henry II. Just think of the amount of other battles it's survived and the reigns it's seen.  During the War of the Roses, it stood tall and proud.  Henry VIII, it was there. Elizabeth I and the Spanish Armada....It survived World War I & II.  It's seen so many things, and if it could, imagine the tales this tree could tell.

And what should defeat this tree after all this time?  A gust of wind.