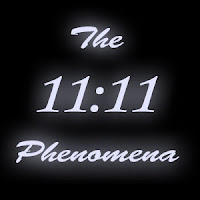 I seem to have developed a new obsession.  It's not quite fully formed yet; it's not keeping me awake at nights, but at the moment it's sitting at the forefront of my mind.  What is this?  It's the 11.11 phenomena.


So, what is this, I hear you ask.  Well, it first come to my attention a few years ago when a work colleague of mine explained that at the same time every day she would look at the clock on her monitor and it would be 11.11.  Every day.  Didn't matter where she was.  She would even look at her watch to see the same numbers displaying with pride.  Eleven eleven; one one one one.  Naturally I thought it strange but put it down to the human body clock, the same for people who automatically wake up at certain times.  It becomes routine, habit.

But then, just the other day, I discovered that a new colleague, someone who has never met my other friend, suffers with the same phenomena.  11.11.  Every day.

Now the cloggs in my over-active mind are beginning to turn.  Two people tuned in to the same time.  Of course I had to google this and discovered that this phenomena doesn't end with my two colleagues.  It's world wide with millions of people tuning in to look at their clocks as it clicks over to 11.11 - be it morning or evening.  Some people even find it goes one step further, with them being booked into hotel rooms, the 11th room on the 11th floor.  Why???  Why are these numbers so significant?  Why are these people so sensitive to them?

The skeptic in me wants to just continue believing that it's our biological clock, and that once we're aware of what's happening we begin to search for these things, thus beginning to see them everywhere, but the creative author in me wants to come up with a bigger theory, one that's far larger than we can understand, one that's ruled by forces beyond our reasoning and control.  The possibilities are endless...

With this fresh in my mind, we thought it would be good to write a short exercise on it in our writers' group.
Here's what I come up with:

It started of as merely looking at the clock at the same time everyday.  11.11.  The only reason why it stood out so much at first was simply the two elevens.  Four ones.  Who wouldn't spot that and smile?  But then it kept happening.  Every day, no matter where I was.  11.11/

I had explained this to my friends and received nothing but shrugs and jokes thrown in my direction.  But they didn't understand.  Unless it was happening to them, they couldn't.  So I laughed with them.  What else could I do?  They didn't realise how unsettling it was becoming.

Then, after a while, the dreams started.  I saw myself climbing to the eleventh floor of a building and opening a heavy fire door with two large ones painted on it.  Beyond stood people, so many people, crammed on what appeared to be a roof.  Who were these people?  What were they all doing here?

The dreams continued for sometime, accompanied by the ever continuous glances at a clock flashing 11.11.  And still I had the constant feeling that something big was happening.

Today everything fell into place.  Something inside snapped.

As the clock clicked over to 11.11 an alarm bell rang inside my head.  I had to leave.  I had to go somewhere, but I didn't know where.  I had a feeling, however, that something was going to guide me.  I stood from my work desk, and without saying a word to my colleagues or my boss, I walked out of the building and headed down the street.  I walked until I reached the street corner and then waited, unsure.  A taxi crawled up the road, a white plastic sign on it's roof displaying its office number.  111 111.  Again the feeling roared inside me and I threw my hand in the air, beckoning it to a stop.

I climbed in the back.

"Where are you off too?" the driver asked.  Truthfully, I answered that I didn't know.  "How about I just drive around until you do know?"

It sounded good to me so I sat in the back and enjoyed the ride, still questioning myself about what I was doing.  Five minutes went by.  Ten minutes.  I looked between the tow front seats and caught the metre just as it flicked over to £11.11p.  Andrenaline surged through me.

The driver done so without argument.  I paid him the fare, thanked him and clkimbed out.  Looking around, I wondered where I had been brought.  I knew where I was but I didn't know why.

Then I saw the building I stood in front of.  It stood tall, towering over me, and with a bar located on its ground floor.  Its name screamed out to me like a huge neon light.  'The Eleventh Sea'.

Coincidence?  I was beginning to think not.  I entered the bar and instantly recognised where I was.  It was the place from my dreams.  Over at the back there should have been a door leading to stairs that climbed up, and sure enough there it was.  FRowning and feeling somewhat frightened now, I headed for the door, and before anyone could call be back, I slipped through and began the ascent.  I knew where I was going now - up to the eleventh floor where I would be greeted bythe number eleven on a heavy fire door, and one that lead to a roof that was packed with people.


The door stood proud at the top of the stairs, and just as predicted on the other side stood the people, all facing towards the west, a direction I myself felt drawn to.  I looked, becoming part of the chosen crowd who were all drawn to this one spot, and saw it.  I saw the huge tidal wave, the tsuami, as it crept closer, crushing and drowning everything in its wake, and wiping out most of the human existance.

From that moment I believed in fate, ruled by higher forces.  Those on the roof were destined to survive, lead by unseen hands, and trusted with the task of rebuilding after the chaos that was left behind...