Always Do Something That Scares You Blogfest 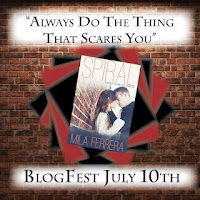 WARNING: DON'T READ ON IF YOU DON'T LIKE SPIDERS...!

In celebration of Mila Ferrera's new book, Spiral, I'm participating with her 'Always Do Something That Scares You' Blogfest. Mila is also hosting a giveaway today too.  I've posted details of this and her book at the bottom.

The gist of the blogfest that sinks with her book is: "In SPIRAL, Nessa confronts her fears about getting close to Aron by reminding herself of her father's motto: "Always do the thing that scares you."  It's probably a saying all of us could use from time to time, so for this blogfest post about a time that you decided to do something even though it scared you, either to get over that fear or because you knew it would be good for you."


For those who have known me for while, you'll know I don't like spiders.  As a kid I would scream and run from the tiniest of spids.  Now I've reached adulthood (don't ask me when that happened.  I'm still in denial at the age of 32) I've grown to tolerate the smaller ones, but once they're past a certain size, the panic button in me gets pressed, I feel physically sick in my stomach, and I have to squeal and back track pretty fast.

However, I don't have this problem when I'm outside.  It's like spiders are outside creatures, and they should be outside and not in my house!  So, if there's one in the room with me, it has to go.

I'm not a mean person, and don't like to kill unnecessarily, so I tend to try and catch spiders in a glass and let them out.  And with the larger ones that I can't catch myself, I have to call upon my trusty hubby to come to my rescue.  But trust me to pick a long-distance lorry driver who is away from home most of the week and who isn't there to help when I need him.

Because of this I've had to conquer my fear.  I can't see a spider and then turn away thinking 'out-of-sight-out-of-mind'.  I know it's still in the house.  I may not be able to see it, but I know it's there, and therefore it has to go there and then.  No if's or buts.  And because I'm often here alone, it's down to me to do it.  Battling this fear is still a work in progress, but I feel I'm winning.  And here's proof!!!

Below are pics of a spider I was nearly mauled to death by the other week. She was in my bathroom hanging off a jumper - EYELEVEL!!!!  The jumper has hanging on the cupboard door for which I had been in and out of for the past ten minutes.  She was probably sitting there with her front legs in the air every time I opened the door screaming "Weeeeeee....!!! Look, no hands....!!!!"

Then I clocked her, and let's just say a squeal wasn't the only thing that come out of my mouth!! I'll leave that to your imagination.  This beast was the largest I've seen in a hell of a long time (as UK spiders go, this was a dinosaur!).  So I battled my fear, and whilst sqweeming and shuddering, and saying many pleasent things to myself, spent another 10 minutes trying to usher this thing off the top of the hanger where she had perched - yes, PERCHED - until she got onto a flat area where I could put a glass over her.

I then succumbed her to some humiliating photos just for scaring the bejezzus outta me, before letting her go as far away from my house as a pjamma'd woman could get it.  All in all, I'd say it was definitely a step towards conquering my fear - and a step worthy to include in this blogfest.

Now, I've warned all those who don't like spiders to not read on, but if you're still here, you've been warned...mwah ha ha ha...and to confirm, the glass used was a coca-cola pint glass!  I was pretty proud of this achievement :) 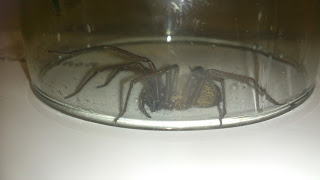 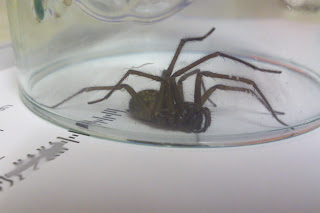 Summary
Nessa Cavanaugh, psychology student, knows how to stay on an even keel. Despite the urging of her mother and her academic advisor to get a life and have some fun, “all work and no play” sums up her plan to survive her grueling internship year at a children's hospital. She doesn't want to end up like her father, whose constant ups and downs broke her family, and avoiding unnecessary emotional entanglements is a must.
Then she (literally) runs into Dr. Aron Lindstrom in the middle of her disastrous first day on the job. The attraction is instant—and terrifying. Nessa knows she should stay away—especially when she finds out he has a reputation for being a player—but Aron is brilliant, intense, and as sexy as they come. When he challenges her to take a chance on him, her plans to stay focused on work start to crumble.

But what begins as passion takes on a dangerous edge, becoming an emotional roller coaster that’s frighteningly familiar. As things spiral out of control, Nessa must decide whether she should hold on for the ride or run … even if it means leaving her heart behind.


And check out the other participants in this brave blogfest :)  Enjoy