Have you ever sat down and wondered why it is you choose to write what you write? Why do you like Crime so much? Why Romance? Why Sci-Fi? Why Comedy?

I've often reflected on this. Why do I like fantasy so much? Why do I like to take myself off to strange worlds where mythical things are no longer myth, where danger of the unknown lurks around every corner? Why can't my fantasies take me to places in the real world where I can then shape them to my own desires?

Because for me, that would defeat the object of escapism.

I can pinpoint the exact moment I wanted to write, and the exact moment I realised it was fantasy. Ok, hands up here who remembers the film 'Flight of Dragons'? It's an old animated film from around 1981-82. Baring in mind I was born in the later part of 1980, when this film actually came out, I don't think I would have had much interest, but by the time it made it to VHS, followed by the small screens of our boxed TV sets, I think I would have been around 5, maybe 6 years old - but obviously at a very impressionable age and more than old enough to realise "Holy crap! This is awesome stuff!"

I remember watching it. It was a weekend, a sunny day, and I preferred to sit inside than go outside and play with all the other kids (learning to be unsociable - a necessity for a writer). This film was on and I was hooked.

For those who haven't had the pleasure of this film, it's about a time that lays between magic and logic, where man was beginning to believe in the study of science. This was making the magical folk weak, and so four magical brothers decide to create their own haven, a place where the magical can live without the dangers of science, but the fourth brother decides that he wants mankind to feel the wrath of dark magic, by making them turn against each other, creating war and weapons of mass destruction, yada yada. And so the battle ensues (although, the film does provide a theory as to how dragons can defy the laws of physics and fly - but I'll save that for another post). 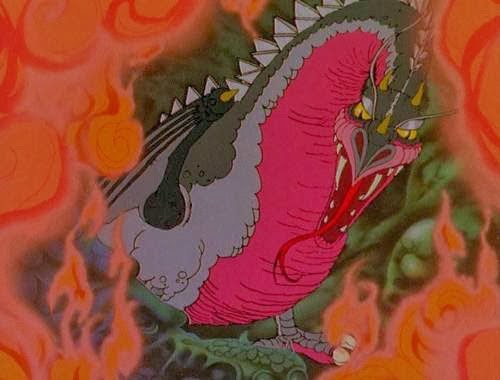 I only ever saw this film once, but images of it have been fresh in my mind for years. Haunted by these images, it wasn't until about two years ago that I hunted this film down. I couldn't even remember what it was called. All I had to go by where the images in my head. But I found it :)
Anyway, after I watched this film, my mind must have been so consumed with the possibilities of fantasy that I shut myself in my room and began to write. Baring in mind a girl of six would have many distractions - namely toys. The story I had in my head never reached past two or three pages. A year or two passed and these images were still calling me, so I tried again. Still I failed. A few times I tried but the idea trailed off, until one day when I was 10. I picked up that pen, I wrote and I never stopped. After a year and a half I had my first story. 74 pages long and fully illustrated. I still have this handwritten story locked away in safe keeping.
From there, fantasy has always been a huge thing for me. I've dabbled elsewhere. Throughout my teen years, I wrote drama, thrillers, horrors, but I've always found myself coming back round to fantasy. It's who I am. It's in my blood - although I have no idea where the horror aspect comes from...
And imagine my surprise when I finally managed to track 'Flight of Dragons' down a few years back only to discover that I had practically re-written it all those years ago. Good job I had no intention of ever submitting it to agents...
So what about you? What made you decide what genre was yours for the conquering?
Posted by DRC at 13:51