This weekend has been pretty busy and it started on Friday with a hunt for someone to accompany me to the London Film and Comic Convention at Earls Court in London. Would you believe, no one - and I mean NO ONE - could get time off work or make it. How inconsiderate they all had plans! So on Friday night I thought 'Sod It' and dragged my step-son along.

Tickets for the LFCC could be bought in advance online, but these were taken off sale at the beginning of the week, meaning my last minute decision to attend meant I had to queue and buy at the door. I was okay with this - after all I was going to meet my childhood crush - Monsieur Michael Biehn - you know, the guy from The Terminator who wasn't Arnold Schwarzenegger. 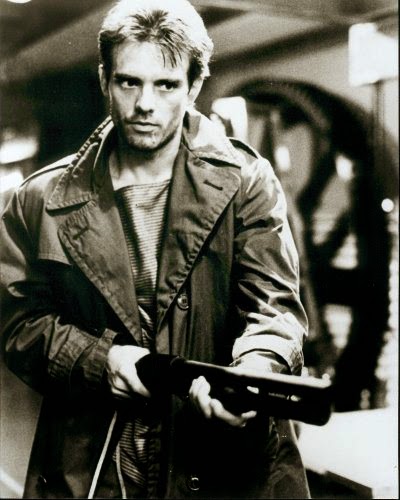 The Terminator was one of the first films I watched that got me hooked on action, and the fact that I thought Michael Biehn as eye-candy made it even better. My secret? I had it bad. I went through a Teen-Obsession, as you do, so imagine my surprise when I found out he was going to be there! I could have my photo with him and everything! I couldn't pass up an opportunity like that. I may have moved on from those Biehn days, but someone like that still holds a special place somewhere in that grey matter.
So I went. I was determined to get his autograph - but my hopes were soon doomed. Guess who else had decided to make an appearance for the first time? Yep, the big man himself, Mr Stan Lee! This revelation brought in the hoards, from Marvel fans, StarWars fans, StarTrek, Game of Thrones, you name it. Even the Stay-Puffed Marshmellow Man made an appearance (this guy's costume was fantastic). And so, a queue to end all queues was formed. For four hours I queued. FOUR HOURS!!! In the sweltering sun! The guy behind me attends LFCC every year and said he'd never known it to queue like this. It was ridiculas! And so we had no option but to blame Stan Lee. Why else would there be so many people?
I was determined though. I wasn't going to waste those hours, but when I found out that after four hours we were still only half way there, and by the time we made it to the door there was still no guarentee of admission, my hopes began to dwindle. The realisation that when we did finally make it to the doors the place would be closing, I admitted defeat. I was exhausted! The convention this year was badly planned, the court inside was rammed and hot, and the organisers obviously hadn't foreseen how busy it would get - or so the conversations went in the queue. So begrudgingly I left the queue and turned for home with my head hanging low.
Absolutely gutted is an understatement. I know there will be many more conventions to attend in the future, but when will another opportunity to meet Michael Biehn arise again?
So despite how much I love you, damn you Stan Lee! Damn you for being so darn popular!!
Posted by DRC at 15:05