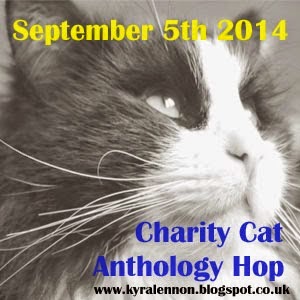 Today I'm taking part in a CatAnthology blog hop hosted by Kyra Lennon over at Write Here, Write Now to raise money for Cat Protection in Teignbridge and Totness.  Seeing as I'm a crazy cat person, I couldn't resist and thought it a good cause.  For the hop, you have to write a piece - any piece in any genre - as long as it includes a cat.

You can read other contributions over at Kyra's Blog.

So here's my contribution:


Adventures of a Galactic Feline

What strange world was this? Uncharted. Unexplored - or at least so she thought. Who knew if another had landed here before and discovered things that she was soon to discover herself?  Good things?  Bad things? Things that only lived in nightmares?

She took a step forward with caution, extending a single paw and carefully placing it on the brown ground that stretched out in front of her. It felt cool under her pads, and it shifted under her weight as loose ground compacted beneath. Lifting her head, she sniffed the air. It was fresh with sweet, floral scents but a hint of something decaying lay further a field. It reminded her of a rubbish bin from back home, but the scent was only slight and too far away to distinguish for sure. Maybe this was one of the things she had yet to discover.

Her thoughts wandered again to whether this was truly uncharted lands. If someone had discovered this world before, why were there no logs? Why were there no records of the strange beasts that inhabited it, and of the strange, tall foliage that flourished around her? The answer was one of two. Either it was true that no other had ever been here or the place was the habitat for larger creatures that provided a cruel end to the lone explorer. She hoped it wasn't the latter.

With rounded eyes, she peered through the darkness and studied her surroundings. An alien leaf brushed against the top of her head, disturbing her fur, and she cringed back and looked up. It stood still, its true colours hidden by the lack of light, but it could have been green. It was hard to tell. It looked like any other leaf, rounded and tapering to a point, and giving it quick sniff, she decided it harmless, but who knew, right? Uncharted, unexplored, an unknown species? Huffing, she turned away. She didn't think it the type to jump out and snatch her body, so as long as she didn't eat it, she believed she'd be alright.

Lowering her head, she held herself low and slunk from within the foliage, her eyes on guard and her ears twitching, listening. If something was stalking her on this unknown territory, she would hear it and then deal with it. Whether it would turn out good in the end, she didn’t know. All she could do was hope and concentrate on her exploration mission at hand.

The foliage parted and a wide open terrain greeted her. Did she have to cross it? The only other way was back and she had already been there and explored that. All that was left was forward – and this wide open expanse. Her whiskers brushed the ground, tickling sensory glands as she sniffed the area beneath her. There was no particular scent, no markings. It smelt acidic, alien, yet strangely familiar. Maybe this world wasn’t that dissimilar to home? With one last scout, she started forward, her paws carrying her closer to the plains.

The ground here was different. No longer did it consist of brown earth, untouched and sheltered by a forest of plants. Now it was coated with something soft and cushiony – almost furry. She gave it a sniff, deciding this was no body-snatcher either, and then scanned the plain beyond again.

It was lifeless, deserted. Even in the darkness nothing moved. But there were eyes. She could feel them, their gaze penetrating her fur. They were there, these foreign creatures, martians, watching, waiting. Would they attack upon sight? Or would they scamper into hiding and wait for her to pass and be gone?

There was only one way to find out.

Extending her sharpened claws in preparation of an attack, she sunk as low as she could and crawled into the opening. Her eyes watched everything. A breeze blew in, carrying away that floral smell and replacing it with that same scent of decay. And there was something else with it, too. Chemicals, burning fuels. She couldn’t place it, but it was otherworldly. It screamed a promise of more life she had yet to discover. There was more to this planet than just foliage and soft, mossy plains.

Movement to her left.

She froze and looked round, wide eyed and flicking her tail. The shadows didn’t stir. But there had been something, she was sure. And then a hint of a rustle. This confirmed it. Something living was over there.

Changing directions, she slowly crawled towards the sound, the soft blanketing on the ground stroking her belly as she went. She stretched out one leg, planted her paw between the blades of mossy leaves, and then pulled her body closer before stretching out her other leg, holding her tail low but curved. What was this life form? Was it going to fight or cower away?

And then it jumped, it’s long, muscular back legs propelling it in the air before her, leaping high and off to the side. Giving a hiss, her own four legs reacted, springing her in the air and away, but her eyes remained on the dark, glistening creature, with its long back feet, short front legs and wide grotesque mouth. And as it landed, it instantly gave another leap.

As all four paws touched down, her claws dug into the soft earth for grip and then pushed her back out. This alien had made her jump, but she was going to have the upper-hand here. She wasn’t going to sit back and give this creature the chance it needed to turn and attack, to use what martian skills it had to blast her back into outer-space – or to stun her and leave her helpless while it crawled over and began devouring her, just like it had done with the last explorer to land here…if he had. No, she had to attack first.

She leapt into the air, her front paws outstretched, her claws ready, and pounced on the unsuspecting thing. It scampered at the assault, darting from her death grip and disappearing among the soft carpeting of the plains. Unsure where it went, she found her legs springing her from her spot again. The thing could be anywhere preparing an assault of its own, and her only defense was to keep moving. She darted first right, then left before tearing in a sprint across the open expanse. Try and follow me now, she thought as she skidded in mid turn, her claws pulling up earth and then springing her back into the air.

A blinding light shot out from the other end of the plains, penetrating the shadows and casting light across the surrounding world. Gasping with terror, she froze where she landed, her wide eyes reflecting the source of the light, and her belly resting on the floor. She had been found! They had answered an unknown call and come. Her exploration mission had failed, her doom neigh.

The voice boomed, its figure silhouetted against the light – the figure of her human.

God-damn it! She was in the throws of her game! Why did they always have to interrupt her? Giving a quick glance across the grass, she saw no evidence of the frog she had hunted. It was hidden among the blades of the lawn somewhere, laying low. There was no chance of her finding it and resuming with her game now. The moment had gone.

Irritated, she sat up and licked a paw, ignoring her human’s request to come in. But then a human request was often the prelude to food. If there was a chance of a little something to eat, then maybe going in would be worth it? Maybe her game had been a worthy sacrifice?

Giving a brief meow, she stood and trotted towards her human with her tail held high. Humans were down-right annoying but sometimes – just sometimes – they had their uses. And besides, there were always other missions to complete and other galaxies to explore inside the house when everyone was asleep…

Bio:  Dawn lives with a her husband and a cat of her own.  When she's not tending to her cat's wishes, she's working a full time job, drawing and writing.  With numerous novels and short stories under her belt, she dreams of one day being able to become a full-time writer, and with her preferred genres being fantasy and horror, it's no wonder her husband has developed a sense of paranoia.  Her cat doesn't seem to mind, though...

*I give Kyra Lennon permission to use this piece in her anthology to help raise money towards Cat Protection.
Posted by DRC at 05:54