Sauron is STILL trying to take over Russia...

I found this article yesterday.  Apparently Moscow in Russia were planning to build a Middle Earth monument in celebration of the release The Hobbit.  They were planning to erect a glowing ‘Eye of Sauron’ on the top of a city skyscraper.  However, plans were scrapped due to complaints from both church and city leaders.

But how awesome would that have been?  After the (not so recent anymore) eruption of Kamchatka Volcano in Eastern Russia, Russia (or that part anyway) became known as New Mordor.  I posted a blog about it almost exactly a year ago (what are the chances…lol) and had to re-share the images I posted, proving why Russia has claim to that name.


So how apt would the glowing ‘Eye of Sauron’ be sitting on top of a Moscow skyscraper?  It would have been perfect!  The final touch to the New Mordor theory!  Such a shame they had to cancel that idea.

Anyway, in celebration of the release of the The Hobbit: The Battle Of Five Armies, the last in the epic trilogy – and maybe the last visit to Middle Earth in general – I’ve chosen this picture for this week’s Pic of the Week.

Have a great weekend everyone…and remember, the Eye of Sauron is watching (although he won’t be bringing presents regardless if you’ve been naughty or nice…) 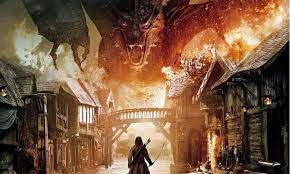