Does Writing Have To Be A Solitary Business? . . .

My friend and I decided to try something new the other evening - a group writing session. I say 'group' but there were only two of us. We were each armed with our laptops and each prepared for an evening of tapping away. She trundled over to mine where we had tea and munch, played with the cats for a bit and then settled down. We've both written flash fiction in writers' groups but never done serious work on our own WIPs. 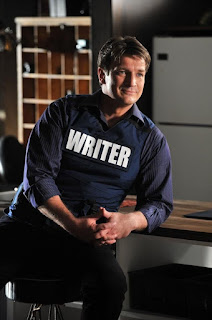 I had this idea a while back. I was watching the first episode of Castle (back when it was semi new. I refused to watch it when it first aired in protest for the way they killed Firefly. I couldn't see Nathan Fillion as anyone else and the loss was still too painful then). Anyway, there he was, Rick Castle, a writer battling writer's block. Oh I was right there with him. The frustrations of the block. Anyway, I watched as he stalked the NYPD, chose a target, and wormed his way into a relationship that would forever be known as Caskett. Then came a scene where he sat down at his laptop and wrote.

So there you go. I was being both social and productive at the same time. How about that? Turns out writing doesn't always have to be a solitary business. Now, I wonder how Nathan Fillion would feel knowing his writing scene in the first episode has just been compared to pornography. Hmm...
Posted by DRC at 09:58