I've just finished reading 'The Death Pit' by Tony Strong, published back in 1999. It centres around Terry Williams, an Academic who travels to Scotland to research a victim of the Scottish Witch Trials back in the late 1700's for her thesis, and finds herself thrown into the world of murder, witchcraft, torture and human sacrifices. It was pretty gory in places, which I don't actually mind being a horror fan.

Anyway, at the weekend I had a cull of my book mountain, deciding to get rid of books I've read and really don't need to keep, and books I've acquired and will probably never read. I only made a small dent in my collection but (more importantly, and to the single raised eyebrow from my husband) I've made room for MORE! And whilst doing this, I decided which book I fancied reading next.

My fictional mountain consists of a wide variety of genres. They say 'to better yourself as a writer, you need to read far and wide outside your genre'. My favourite writer is Stephen King. That's no secret, and the entire bookshelf/shrine overflowing with his work can attest to that. I also read fantasy, with the likes of Scott Lynch, Joe Abercrombie and Mark Lawrence, to name a few. Then there's the thrillers, the comedies, adventures, and historical. There's a few.

So, what book is next on my list? One that's a far cry from blood, gore, and murder, that's for sure. Jane Austen's 'Persuasion'. I do confess to being an Austen fan. I own a few of her classics
but this one become hidden behind the masses of fictional horror and intrigue and has never been read. The spine isn't even creased! So, I had to change that.

I started reading it today, beginning with the small biography of Austen at the front, and to my surprise, today, 18th July, is the actual day she died back in 1817! Today! She died in Winchester, UK, and her brother, Henry, oversaw the publications of her last pieces, Northanger Abbey and Persuasion.

I felt a little choked after realising this, and wondered what forces made me pick up this book after owning it for so long and remembering her on the day she died...

So tonight, I'll be raising a glass (or a cup of tea) and sitting back, remembering her, whilst reading one of the last books she ever wrote. 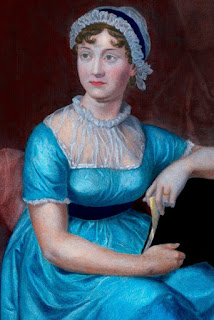