During the summer, I went and stayed with my parents down in Devon, and for a day out we visited Powderham Castle. I like walking around old manor homes and castles, and seeing how they used to live. Like most manor houses, the walls were decorated with age-old portraits of previous tenants and generations long gone, however, one painting caught my attention.


Standing, looking tall, proud and gorgeous, was a woman, dressed in a flowing blue gown and tall hair, but behind her, among the background, was a dark figure of a man. No one knew who this figure belonged to. In later investigations, I was told that that the portrait was of Lady Frances Finch and the artist was Thomas Hudson. I am still investigating. But our exercise was inspired by this figure, and we had to come up with a short piece revolving around this mystery. 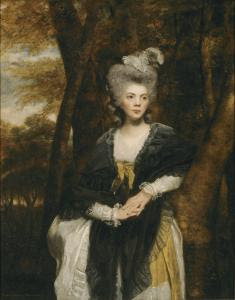 She was a powerful figure in society, a 17th century duchess, loved and respected by all who knew her. Her beauty far excelled all those around her, and where ever she went heads would turn. Her beauty was matched only by her kindness towards her court. Her smile was constantly bright, wide and welcoming . . . but her eyes betrayed her.
Within, her beautiful soul was trapped. Her life had been handed to the duke at the age of fourteen for marriage and the promise of a son. Her wealth and her position kept her captive. Her husband allowed himself the freedom a duke deserved, but she was denied all she wanted, even the loved craved from the man she had given her hand to.
It never became knowledge to her court about the secret life she sought elsewhere. She excepted her husband's elusiveness and the duties her position demanded, but in return she found the love she desired from an artist who was often hired by the duke. With his long hours spent within their home, a friendship had soon blossomed, a friendship that soon turned to love.
Her husband never knew, never even suspected the possibility that his three children were not his. It was to be a secret that the duchess and her lover would take to the grave, and the only evidence left behind of what they shared was in an exquisite portrait - one of the duchess painted by her lover - and of the mysterious black figure standing in the background behind her.
It was to be the only time they could both be seen together in the public eye, and one that would keep their secret passion alive for the centuries to come . . .
*Portrait is another of Lady Frances Finch.
Posted by DRC at 07:33