Since publishing `Pic of the Week` on this blog, it came to light that a good friend of mine shares the same taste in art. She is a fellow writer and has written some pretty dark, fantastic pieces herself. During a conversation we had this week, she pointed out that most artwork of this genre consist of women, and she is after a fantasy picture of a man.

Easier said than done.
But while I was scouting I came across a picture that I rather liked. I was looking up the artist `Linda Bergkvist` at the time, and would have presumed it was one of her pieces, but on closer inspection the signature at the bottom doesn't resemble that of the artist. I decided it had to be this week's pic, but unfortunately I cannot tell you anything about the artist. In this, I have failed . . . 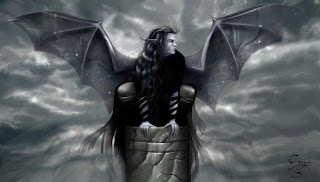