Pic of the Week vs Clash of the Titans...

I went and saw the new release of Clash of the Titans during the week. The original was my all-time favourite film whilst I was growing up, with tales of winged horses, giant scorpions, the Kraken, and of course, the horrific half woman - half serpent, Medusa, who could turn any man to stone with a single glance. This was probably a tell-tale sign that I would grow up with a deep fascination with fantasy.

The new version doesn't quite follow the original, but it was still a fantastic film, and the graphics were superb (still getting used to 3D, though). And for any fan of the original, look out for the golden owl in the new one. He gets a cameo appearance which made me giggle. I don't think the director could resist slipping it in there.

However, it got me thinking. Greek religion back then wasn't a simple one. You had numerous Gods, demi Gods, Titans, Giants, and monsters, including the Cyclopes, Minotaurs, Herpes and Centaurs. Each had their own tale to tell, whether it be a tale of love, of heroism, of murder and betrayal, or even jealousy. It made me wonder whether Greek Mythology was the birth of the fantasy genre.

The tale of Medusa is one that has always struck me. She was always my favourite character in the original Clash of the Titans, and I'll give credit where it's due for the new version of her. A beautiful woman made to look ugly. There are many different variations of her tale, but the one I like best is tragic and sad, and brings life to the beast forced to dwell in her ruined temple.

It is said that Medusa was one of three daughters. She was stunningly beautiful with long flowing hair but arrogant to go with it. She was very promiscuous and flirtatious, and one day caught the eye of Poseidon, God of the Sea. In terror, she fled for sanctuary to the temple of Athena, but Poseidon caught up with her and had his wicked way with her inside. Athena was outraged and disgusted by this happening in her temple, and put a curse of Medusa, turning her into a half woman-half serpent, with snakes for her hair. She also made it that if she ever set her gaze upon another man again, they would be turned to stone. So Medusa was cursed to stay in the temple, alone, miserable and a victim of a crime that she wasn't entirely answerable to, until Perseus brought about her end and beheaded her. No wonder men feared to go any where near her. They're afraid to go near any woman with a grudge.

If you delve deep into Greek Mythology, there are so many fantastic ideas that could be used to inspire. I find it all fascinating, and seeing as it's Pic of the Week day, and in celebration of the new release of Clash of the Titans (and in memory of the cursed Gorgon), I present to you the new an improved version of Medusa... 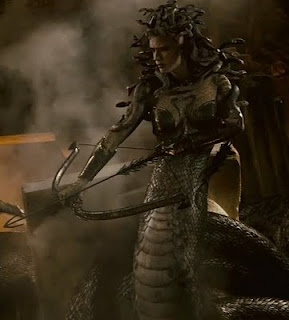