We've been going on for the last few weeks about writing book reviews. A colleague of mine is making a big success writing book reviews for Hub magazine and getting his foot in the door of publishing - and a very well done to him. Even though this is actually a good idea, and a way to build a fan base before you even have your beloved work published, I can't help but sit there and think that reviews just aren't for me. And they're not. That's just me being honest.
But I still had to do my homework and write one - despite the fact that it's three weeks over due. Anyway, last night I treated myself to a movie night. I purchased Robin Hood on DVD - yes, the new one with Russell Crowe - and I curled up in my jim-jams on the sofa and pressed play.
Me, personally, I wasn't disappointed, so I thought I'd practice review writing on this. The thing to bare in mind with reviews is that it's the opinion of one person - and people differ, so not everyone will agree with this. In fact not a lot will. I've read some real dismal reviews about this film, and even though some of them state some valid points, I wouldn't go as far as giving it a bad review. 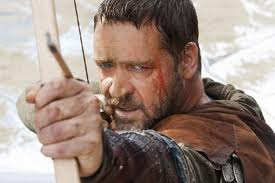 ROBIN HOOD
So, what's it all about? A hero coming back from the crusades and robs from the rich to give to the poor? Wrong. The film lacks any of that legendary, romantic hero malarkey - to a point. It's gritty history, not romantic dribble.
Robin Longstride (Russell Crowe) is an archer on the crusades with King Richard. After the King's death in France, Robin and a few fellow crusaders flea and make a run back for England. On their way they come across an ambush and discover that the party were escorting the King's crown and the news of his death back to the Tower of London. They also manage to catch the dying breath of Lord Loxley, and Robin is made to promise to return the Lord's sword back to his father in Nottingham. Seizing the opportunity, the group pose as Knights and use the crown as their key home.
Alongside all this is the tale of Prince John and his friend Godfrey (Mark Strong). But Godfrey is more than just a friend. He's a traitor to the crown and is liaising with the King of France who is planning an invasion. His scheme is to use the rise in taxes as a way to get the people to revolt against Prince John, thus putting England at war with itself and leaving it open for the French.
But Godfrey didn't count on Robin Longstride.
In Nottingham, Robin is made discover his heritage, is acquainted with Maid Marion (Cate Blanchett) and then discovers the truth behind the invasion. 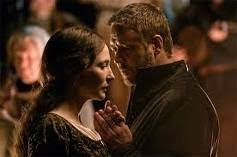 It is he who manages to persuade to people of England not to fight each other, but to unite as a country and stand against the French - which they do and succeed. It is in this battle that Robin finally kills Godfrey, saving Maid Marion in the process. But Prince John is outraged when the people start to hail Robin and not him, thus, in a fit of rage, he classes Robin as an outlaw.
The story line feels like it could be continued, and indeed it could, because this is the point where legend begins; where Robin and his band of merry men hide in the depths of Sherwood Forest, and where they rob from the rich and give to the poor. But never, I feel, has the full reason why Robin was outlawed been truly explored . Now it has, and despite the fact this is still fiction, it paves a perfect path for the legends that we so know and love. And it still has those lovably rogues; the not-so-Little John, Friar Tuck and his love of mead, Will Scarlet, and the dastardly Sheriff of Nottingham (who only has a few walk on roles, but a role that paves the way for the bigger role to come).
As for the film itself - I have to agree with some reviews that this isn't Ridley Scott's finest moment. It's no Gladiator. The last battle scene on the shores of Dungeness feels stifled. I'd imagine that if the French were to invade England, they would have had a larger army. The battle itself would have been bigger and bloodier. The scene's main focus isn't t 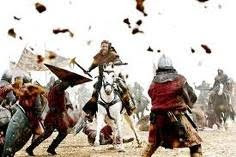 he battle itself, but Robin's flight against Godfrey. However, you can't help but be aware of the sparseness of everything around you as the battle to save England supposedly rages on.
I also found it a little odd how everything that happens to Robin is due to coincidence. He promises to take a dying stranger's sword back to his father - coincidence. The stranger's father happens to know of Robin's mysterious heritage - coincidence. The stranger's father and his father plotted together - coincidence. Some people believe everything happens for a reason. There's a name for this: Fate. For those who don't believe in it, it can begin to look a little unbelievable and pretentious.
BUT . . .
Life is full of coincidences. The world back then wasn't as populated as it is now. In a land ruled by one monarchy, why couldn't one Lord know the name of another? So the fact that Lord Loxley Sr knew of Robin's father could very well have happened. That's the thing with this film. It's not filled with the romantic fairy tales we grew up with. It's based on English History. I know it's something that shouldn't be taken as text-book gospel - it is purely fictional - but it's probably closer to the real story of what actually happened 700 years ago than anything else that's been told.
As for the film? I found it enjoyable with a steady pace - and if you're like me who doesn't delve too far into the 'hows' and 'whys' of a plot, who is quite happy to sit there and let the DVD entertain a couple of hours away, then you'll probably like it. I did, and if you ask my opinion? I think the Crowe still has it.
7/10
(So, how did my first review go . . . ?)
Posted by DRC at 06:28