Friday's Pic of the Week inspired me so much I thought I'd write a little piece to go with it. Enjoy!

And so this was how it was to end. There was to be no fairytale romance for me; no riding off into the sunset with the man I loved. Instead here I was, bound and waiting for death. His blood churned with the water that surrounded me, like smoke in open air – only this was red. It danced in the currents, taunting me and reminding me of its intentions. It was calling on the waves; calling to any willing to listen; any that was willing to bring about my death. I prayed that none would come, but I knew it was inevitable. The smell of blood on the open currents carried for miles. Something would be coming soon to answer those calls.

I closed my eyes against the swaying sight in front of me. I didn’t want to look upon the horrific scene anymore. It wrenched at my broken heart. I felt the gentle shift of the sand against my tail, a contrast compared to the rough feel of the iron anchor against my back. Every little movement caused it to grate against my skin, and I should have been reeling in pain but my sorrow numbed me to it. Instead I had no choice but to accepted it – and wait.

I recalled the events that brought me to this situation, this final hour. They had started off so promising, and I was hopeful that there was going to be a happy ending. I didn’t know how it was going work, but I knew we’d be together. Then things went wrong. We were caught and we were punished – by both our people.

Man and mermaids were forbidden to meet.

At least that was the law under the waves – a law that I chose to disobey. But it wasn’t my intention. I couldn’t just stay back and watch as nature claimed the life of this man. He had been thrown overboard from the galleon ship that he crewed during a storm. He would have died had I not taken hold of him and carried him back to shore. As I lay on the sand watching over him, I had no idea what was happening to his ship. I didn’t know that the storm was to claim it, that the seas were going to drag it down and state it as its own. How could I? 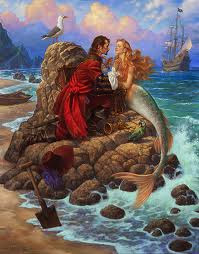 I was too preoccupied with staring at the man I had just rescued, mesmerised by his beauty and innocence. And when he opened his eyes and stared upon me, we were both hooked.

I knew it was wrong, but my heart couldn’t deny what I felt. My love for him continued to grow, and he felt exactly the same. We’d meet in a nearby cove where no one ventured, and we’d share our love – but one day we were caught, and our relationship wasn’t just frowned upon, it was revolted against. His people were sickened and claimed that it had been me who had taken down their ship. I had been the cause of all those deaths, despite the fact that I saved one and was nowhere near the ship when it went down.

They sentenced my love to death.

Horrified, I sought help from my own, hoping that they could help, that they could somehow rescue him, but they shunned me. Our law of never meeting with man was because of this exact scenario. Men believed mermaids to be a bad omen, and because of their beliefs, they were cruel and cold hearted. They believed me that I had nothing to do with the taking down of their ship, but my being there at that time was bad luck.

They wouldn’t help, and they turned me away.

In the end I had no choice but to go back and try to plead with the men, but they chose to use me as an example instead. They wanted to send a message beneath the waves that they were not people to toy with. If we took lives, then so would they. Where their beliefs came from, I didn’t know, and I certainly didn’t understand. We had never hurt anyone, but still I found myself captive and brought back out to sea. I was forced against their anchor and bound, the crew jeering and taunting. My love could only cry as he watched, his eyes telling me how sorry he was.

And then the anchor was dropped overboard.

What they hoped to achieve with this, I didn’t know. Didn’t they understand that I couldn’t drown? That I lived in these salty waters? But as I registered the splash above me, I knew what they meant to do.

Looking up I saw as my love, bound and tied to iron weights, sunk to the seabed before me. He withered against his ties, the oxygen in his lungs running out, and I screamed and fought against my own ties, wanting to help him, wanting to prevent him from downing.

But I couldn’t help.

I watched with shame as he stopped moving and stared at me one last time, and then as he died before my eyes. I had wept then, cried and wailed. I fought some more against the rope that bound me to the anchor, but I couldn’t move.

My heart was broken.

And then I noticed the blood.

I understood then how they were intending to kill me. They had slit my loves arms, wanting his blood to be taken by the surrounding currents. They wanted to call the 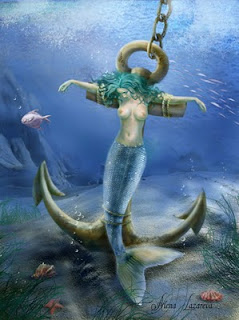 beasts that lurked in the deep, wanted them to smell the blood and come with hunger in their minds. They wanted to have our flesh ripped from our very bones. And me being tied to the anchor, I couldn’t hide. But then why would I? I had lost the one person I loved, been shunned from my very people because of it, and I couldn’t live with the grief and guilt that it had been I who had done this to him, I who had caused his death.

No, I decided. Let the men win. Let the beasts come.