I read a few blogs last week which spoke about first manuscripts, both published and practice runs. Carole Gill from over at Wicked Writers (everybody wave) spoke of her first novel being in the Crime Genre - although she now writes Dark Lit. Her first manuscript, 'Death is my Destiny' was inspired by the great noir classics. (Check out her blog post on Wicked Writers to read more).

It reminded me of my first manuscript. Yes, it's a complete mess; yes, there seems to be no such thing as Grammar within; yes, there are plot holes; yes there are flaws. In other words, it will NEVER see a publisher. But when I wrote it, I never intended for it to be published.

I'd written a few short stories before this; the first about a father who built and gave his daughter a time machine, allowing her to go back to prehistoric times, rescue a young Triceratops from a Tyrannosaurus (I loved Dinosaurs as a kid), and bring him home to keep as a pet; another being about a woman befriending a Dolphin who eventually got washed ashore and died - very sad stuff for a kid between the ages of 6 and 9. I had also attempted to start my first novel on numerous occasions, but it fizzled after a couple pages . . . until one day at the age of 10 I started and didn't stop. 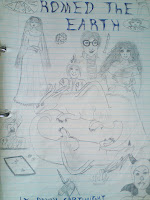 I remember, somewhere in the age bracket of about 6 or 7, sitting down and watching an animated film with my family. It had everything; dragons, princesses, wizards, heroes and adventure. This film inspired my first manuscript.

I titled it: 'When Dragons Roamed the Earth' . . . or 'Romed' as I originally spelt it.

It was about a man named John who got taken from earth to a new fantasy world and was given the mission of rescuing a princess from an Evil Brother. There were four magical brothers, blue, yellow, green and red - but the red one was evil and was intent on killing the last two 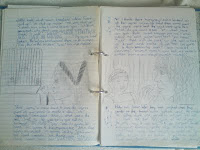 remaining princesses in order to rule the world. With two talking dragons as travelling companions, his adventures began and continued throughout 76 pages of scrawling handwritten text and illustrations.

The other month I was curious to remember what that film was that shaped the way I am today, and spent hours looking for that needle in a haystack on the great-wide web. But I was rewarded. I found the film, 'The Flight of Dragons', and I was pleasantly shocked. As I watched the trailer on YouTube I saw my first characters come to life. The film had everything; my two princesses - or heroines - the hero, the dragons, and four magical brothers including the evil red one. I had re-written the film - or at least stolen their characters. But the feeling of seeing this again after 25 years was overwhelming. Even though I can't remember the whole film now, it's played a HUGE role in my life. I'm now contemplating whether or not to look for the DVD . . .

Since writing my first manuscript, I've gone on to write 14 more, beginning with fantasy, then moving to thriller, horror and now, 20 years later, back to fantasy. So how come I've written 14 manuscripts but am not yet published? Carole Gill answered that.

"We grow while we wait, if we don't stress or pressure ourselves into paralysis. That first MS is our springboard--it might be a mess but it's a first step and first steps are important because every journey begins with one!"

It's taken me 20 wonderful years of writing adventures to get where I am today, not only honing the craft, but building confidence -something that is so important when wanting to put your work out there - and it's only now that I'm longing to meet publication round one of the nearing corners . . .

*Thank you Carole Gill for the inspiration for today's post.
Posted by DRC at 06:50