It was on this day, 19th August 1612, when three women, Jane Southworth, Jennet Bierley and Ellen Bierley - otherwise known as the Samlesbury Witches - were tried for witchcraft. However, the evidence against them proved invalid when their accuser, a 14 year old girl, admitted that her story of them shape-changing, harressment, murdering and eating babies, and liasing with dark figures that were not like men were untrue. It turned out she had been coached by her priest to say these things.

This trial was one of many that lasted for two days and took place at Lancaster Castle, UK, seeing many men, women and children hanged.

This date also saw the execution of one woman and four men, all accused of witchcraft during the Salem Witch Trials during 1692, which took place in colonial Massachusetts.

Because of the coincidence of these two events taking place on the same day, I thought I'd go with a 'witch' theme for this week's Pic of the Week. The chosen artist is Mark Kelso. He does a lot of nature paintings - and some spectacular scenery - but he also has a collection of fantasy art. He's worth a browse . . . 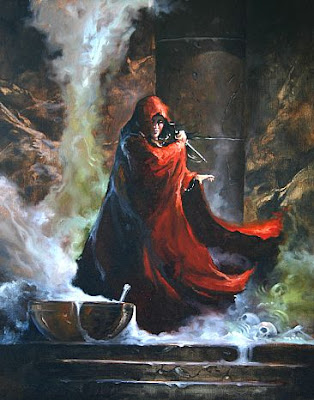