What a weekend. Lots of things happened - well, I wouldn't say lots, but there was more than usual.

1: I finished the second part to Son of Jack, which you would have read about in Friday's post. It's now been emailed around to my critique group for them to savagely rip to pieces nicely :) I'm now planning part three and will begin new adventures in writing very soon.

2: I had a fight with my cat. It gets chilly in here sometimes, and just recently I've had to resort to bringing my blanket out of its summer hibernation (god knows what I'm gonna be like come winter). So, as I sat, wrapped up all nice, warm and cosy like in my blanket whilst working away, I was well aware of a pair of beady eyes watching me and sizing me and waiting for that moment. As I got up to get a drink, the fight began. As you can see from the below piccy, she won...lol. 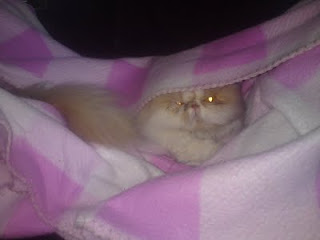 3: Hatfield House celebrated 400 years of existence. For those that aren't up on English History, the house that stands today was built in 1611, however, there was another house there before that was built in 1497. It housed two of Henry VIII's children, Edward - who was crowned King after Henry at the age of 9, and who died at the mere age of 15 - and his sister, Elizabeth, daughter of the famous Anne Boleyn, Henry's second wife who was beheaded for adultery and witchcraft. Elizabeth was to eventually to become Queen Elizabeth I.

In 1608 three wings were torn down by Robert Cecil, the First Earl of Salisbury, and was rebuilt to a new design, the design that still stands today and that celebrated its 400 year anniversary. And, boy, did it go out with a bang. Just under 15,000 fireworks were used on and around the actual house in the most spectacular firework display I've ever seen. 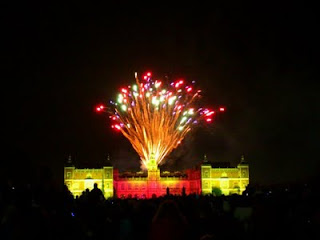 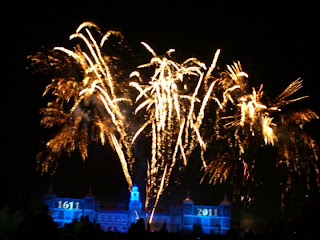 4: I finally got round to giving the picture of the X-men (Revisit that blog post to refresh your memory if you wish) that I had been working to my friend. I was really pleased with the way it come out and I hope they like it. But I couldn't give it away with taking a sneak piccy on my phone. The colours, albeit subtle, didn't come out in here. I may get another piccy at a later date. 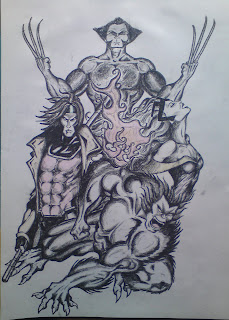 5: And not forgetting the 10 year anniversary of 9/11. I held my respects on Sunday and my thoughts are with all the victims and survivors. I can't believe 10 years has gone since that horrible day. I can still remember exactly where I was and how sickened and horrified I felt when it happened. It's a day that has scarred us all.
Posted by DRC at 06:36