That's one hellova name - but then she's one hellovan artist.
My friend is getting married this weekend - ahhhh bless - and so I thought I'd go with the whole wedding theme. Not to put a downer on the event, I suddenly thought of the film 'Corpse Bride' and so googled it to see what it would come up with. Apart from the usual pictures of the film and the animated characters, I come across this little gem.
Jena Della Grottaglia - or the Autumn Goddess as she is also known as - has a gallery on both DeviantArt and her own website (worth a visit just to see it. It's stunning!). From her about me page I read that when she was younger the teacher set them an essay assignment of 1000 words, so she drew a picture and handed that in instead, claiming that a 'picture speaks 1000 words'. Classic!
So anyway, Jena Della Grottaglia-Maldonado's 'Corpse Bride'.
Enjoy and have a grand weekend... 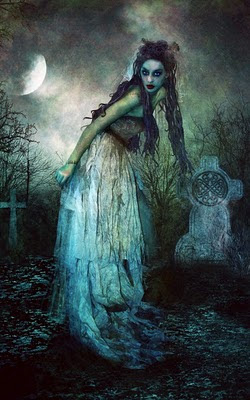