Biting The Bullet And Finishing That Novel...

Firstly, I'd like to congratulate one of my writer friends on finishing the first draft of their second novel.  It's such a great feeling when you actually come to the last page and get to finally type the words 'The End'.  You know you still have a huge journey ahead of you in the form of editing, but just finishing that first draft and having a full manuscript in front of you spreads a warm feeling inside caused by a mixture of emotions including pride and love.

You done it!  You finished it!  You've beaten all odds!

Not every aspiring writer reaches the end of their first novel.  A common problem that I've seen in many writers over the years is just getting past the first few chapters.  For those who know me, I've written a fair few novels in my time.  I'm a sucker for finishing what I started.  Editing is a different matter for me though and it's only been in recent years that I've started taking this just as seriously as writing.

However, one topic of discussion we once had was 'how do you actually reach the end?'

A lot of writers suddenly become obsessed with their opening chapter and the few chapters following, constantly going back editing things, changing things and tweaking things.  They just can't get out of this habit and thus they never break forth into the rest of the story.  My response to this was to just bite the bullet, forget about those first chapters and write.  Just write!  You know there may be things that need changing but do that later.  Write and then write some more.  Don't worry too much about spelling, grammar, or those little plot holes.  Write - and before you know it you've finished your book.  Yeah, it's only a first draft but it's finished; you've written those two words; and most importantly, you've beaten yourself and your habit.  You've climbed out of that rutt!  It's such an achievement that you never thought you'd reach before.  THEN you can go back an edit and change things.

My friend was in this position when I first met her.  She spent god knows how long stuck on the first few chapters of her first novel, and after having this conversation, she took what was said on board, went home and wrote.  Now, low and behold, she's just finished her second novel.  She's moved on so far since those days of struggling, and so deserves a HUGE congratulations and a 'good luck' for the rest of the editing ahead. 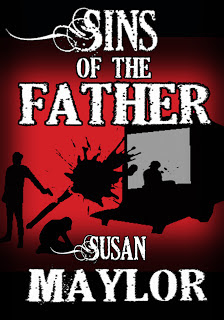 'Sins of the Father' is the second instalment of Susan Maylor's 'Nathan Turner series'.  The first thriller, Justice Served Cold, is available on amazon for Kindle and will also soon be available in print.