It's been a while since I posted one of these, but here's a writing exercise that our writers' group done the other night.

The exercise was to pick a book - any book - and imagine that for some unknown reason you wake up and find yourself in the middle of a scene.  See how long it takes for you to guess which book I chose :)

As soon as my vision came back all I could see was red.  Had I really hit my head that hard?

As my eyes began to come round I started to make out shapes in the redness, shadows, objects...a hand...my hand.  And as other colour began to bleed in around me, my hand remained its rosy shade.  I twiddled my fingers.  They felt fine and moved with ease, but why were they red?  Looking up, I stared at the scene that unfolded before me, like a coloured fog lifting from the ground.

I was in a garden.  The grass was green and lush, the sky crystal blue, and hedges surrounded me on all sides, all crisp and trimmed to form blocks that opened up for paths to lead off beyond them.  It reminded me of a maze.

A tree grew beside where I stood, a small tree just a little taller than I was, and I noticed the roses that grew on it, fully bloomed and beautiful against their leaves.  The fact that some were red and some were white didn't strike me as odd.  What struck me was why I was here.  One minute I had been painting my bathroom, slipping from the stool, falling and feeling my head make contact with the sink - and the next I was standing in this summer garden.  Where was I?

It could have been a dream, I thought, but the warmth from the sun and the feel of the cool breeze felt so real - and those roses!  Their smell!  That was real too.

The voice boomed from behind the hedges, deep and angry yet somewhat feminine.  I thrashed round to look across the way but no one was there.

Gasping I looked down at my hand again.  It was still red only it wasn't a fog.  It was paint.  Red paint.  I looked at the red roses on the tree.  They were dripping, bleeding their redness on the leaves about them and revealing patches of white petal beneath.

Was it me?  Had I been painting those roses red?

"Who's been painting my roses red!"

A large form in a boulbous dress burst forth from a path, her face red with anger, and her wide eyes glared around the garden before falling on me and my hand.

The Queen of Hearts stared daggers at me.

I shook my head, unbelieving of the whole scene that was playing out before me.  Was I really in Alice in Wonderland?  No, I thought.  I couldn't be.  Must be a dream, but then the Queen raised her hand and stretched a fat stubby finger in my direction.  The fear I felt was very real.

"Off with her head!"

Before I could argue my defence, before I could plead my innocence, guards rushed towards me from behind her and seized me.  The grip I felt on my arms was just as real.  Too real.  I couldn't control the scream that emerged from my throat as they swept me off my feet and dragged me deep into the maze with the full intention of carrying out what they had been ordered to do. 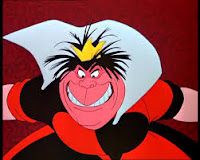 They were going to cut off my head.

And as they dragged me closer to the guillotine, one question sprang to my mind.