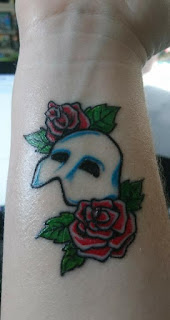 I've always loved Phantom of the Opera. It's something that has been a part of me since childhood. My nan used to love it and owned the vinyl, and every Sunday my sisters and I would walk round to see her and listen to it and sing along (I dread to think what we actually sounded like...). Because of this, it's always held a little place in my heart.

So when my friend said she had tickets to see the show in London and asked if I wanted to join them I literally jumped at the chance. I'd obviously heard the soundtrack, I've watched the film with Gerard Butler, but I'd never seen it live.

Oh my God!!! It was amazing. I've been to numerous shows and nothing has touched me as much as this one. I don't know what it was, whether it was the emotional story line, the power in the songs, or even nostalgia, bringing back memories of my nan, but I loved it so much I decided I needed something to commemorate the occasion. And what better way to honor it than with a tattoo.


So have any of you felt the need to commemorate an event in such a permanent way?
Posted by DRC at 13:35