As promised, here is the first draft of the opening chapter for my new novel. Feel free to leave feedback if you want (every little helps) but mostly...enjoy.

Lady of the Seas
Opening Chapter
“GET those god-damn sails in!” 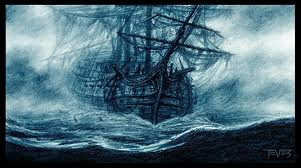 The Captain’s yell struggled to be heard over the constant roar of the seas. He fought to keep his grip on the ship’s wheel, his hands trying to hold on to the wet wood. A force kept yanking at it, wanting to turn it to port and he put in all his strength to keep it from going.

Most of his crew were on deck, fighting and trying to prevent the ship from being turned by the wind. Men were climbing up the shrouds of the masts to help bring in the sails. Without them catching the wind, the pressure on the ship would be reduced but it was proving a difficult task. The storm was battering them. The Captain’s heart jolted each time he saw one of his men slip from their footings around the mast. They yelled orders and encouragement to each other as they gathered the material up, suffering the onslaught of rain and gales. They worked as a team, fighting the winds that wanted to turn them into the vicious waves. If that happened the Scarlet Sail would then become vulnerable to whatever the storm threw at them. They had to keep her straight.

The Captain groaned, baring his teeth as he pushed against the wheel, trying to keep it from going its own way. The deck around him was slippery, and as the ship veered over, his feet slid. He yelled as he fell, clinging on to the wheel for support. The wheel turned in the direction he didn’t want it to go. His legs scrambled, his feet searching for the grip he needed to push himself back up, and just as he found it, a torrent of water engulfed him.

He fell back down, his fingers just hooking the wheel. Catching his breath, he gave another yell.

The ship was turning.

As the wave subsided, the water draining back to where it came from, the Captain found his footing again and heaved himself up. His eyes stung and his throat throbbed with the amount of seawater he had swallowed, but he couldn’t care about that now. He had to get the ship back on course. Standing up against the wind and rain, he pushed himself against the wheel. It didn’t want to move. The force was too great for one man. The ship veered again, rolling with the giant waves, and he could see the ocean’s surface over the edge of the deck. The ship was leaning too much. He had to win her back.

His continuous yells were lost amid the crashing thunder. A streak of fork lightning illuminated the black seas, and the Captain’s eyes opened wide with horror at the sight of the surrounding waves. If he didn’t turn the wheel soon they would crush the Scarlet Sail as if she were made of paper. They would smash her apart, taking the lives of everyone on board.

“Turn, you bitch!” he screamed into the storm.

A second pair of hands joined his, gripping the slippery wood and heaving. The Captain looked at the Master’s Mate. His gaze spoke of his gratitude, and as both men pulled on the wheel, it began to turn. The Scarlet Sail struggled against the onslaught, twisting and groaning with the force of the storm, but despite everything, she obeyed. The Captain laughed with triumph as his control over the vessel came back. They weren’t beaten yet.

Another wave crashed over the deck, pounding down on both men, but they kept control. The ship leaned with another wave. A crew member screamed as he slipped across the deck to the other side. The Captain watched, powerless to help, but was glad to see him crash against the ballast railing instead of slipping overboard. Another member grabbed him, pulled him to his feet and slipped a rope around to secure him.

His crew were strong, but the storm was stronger. They were struggling and weakening quick. He didn’t know how much more they would be able to tolerate. They had been battling this storm for the best part for three days, but today was by far the worst. The winds had changed direction and the waves were now taller than the Scarlet Sail herself. Little sleep had been had and there was no time for eating. The galley fires had to be extinguished incase it spread, and no food was cooked.

A few injured men lay huddled below decks, unable to assist in the battle and unable to get comfortable with the constant movement. They had no choice but to look after themselves, to tend to their own wounds, and pray that the storm would soon subside.

Below them more yells echoed about the hull as men worked the bilge pumps, but as quick as they were removing the floodwaters, more was replacing it. It was a continuous battle that they couldn’t win. And about them, others scuttled around, repairing any damage that the Scarlet Sail sustained. It had to be done quick, make-shift, if necessary. If a split was left for too long at sea, it could rip the ship apart. It needed to be fixed as soon as it appeared.

The Captain could feel his crew’s pain. They were exhausted, but they couldn’t stop. If they did, they knew their lives would be handed to the seas. They refused to go without a fight, and they refused to let the ship give them up. She had been battered, broken, repaired, broken again, but still she sailed on, crashing against the waves, rolling with the winds and fighting her way through. The Scarlet Sail was as strong as the crew who sailed her, but even she had her weaknesses, and the Captain wept for her. He didn’t know how long she could fight, didn’t know how much strength she had left in her, but he had to hope that she had enough to see them through the storm. She had come too far to give up.

The cracking sound was one that the Captain had dreaded to hear. It was louder than the thunder that exploded overhead and louder than the crash of the surrounding waves. It was the sound of the Scarlet Sail breaking. Another flash of lightning illuminated the sight of the Foremast as it split half way down. His men screamed in panic and horror as the beam toppled forward, pulling sails and ropes with it. They scuttled out of its way as it crushed the deck where it landed. Screams of agony came from those who had been pulled down with it, along with those who hadn’t managed to run in time.

One voice in particular struck the Captain as he heard it fall overboard and be engulfed by the seas, lost forever. He wanted to mourn the loss but it spurred on his determination to survive this and to bring the Scarlet Sail and her crew to safety.

He gripped the wheel tighter as another wave pounded him.

Throughout the commotion of the breaking mast, the Captain refused to acknowledge how much damage it had caused at the bow. As he fought to keep control, he was unaware of the anchor stay being shattered and of the anchor falling from the ship. It plunged into the black waters, sinking deep, and pulling the anchor rope with it. The weight carried the anchor through the murky water straight to the seabed where it collided with the submerged rocks.

The storm forced the Scarlet Sail onwards, her anchor dragging. She lurched on the waves, one minute anchored, the next free. The Captain could feel the jerking movements on the wheel and applied more pressure in fighting to keep her steady, unaware of what was happening below the surface.

The anchor continued to drag and then came up against a large boulder that it hooked on. The boulder leered back, its shape resembling the form of the King of the Seas, with the torso of a man and the tendrils of an octopus. The anchor gripped firm, refusing to let go, and the boulder rocked with the pressure. As the Captain continued to struggle at the helm above, the boulder gave and toppled on its side. The seabed stirred, sending a cloud of sand rising up into the whirling tides, and from beneath the boulder something emerged that resembled a large bubble. It cut through the dust cloud, ascending through the stormy waters and up towards the Scarlet Sail. 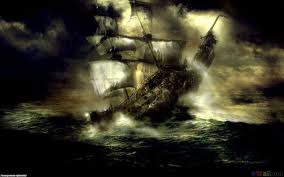 The anchor stayed fast to the mysterious carved boulder, pulling the anchor rope taught, and no matter how much effort the Captain put into holding the wheel, he couldn’t stop the ship from turning.
Posted by DRC at 06:28