I've always known, but it was confirmed last night that the school I 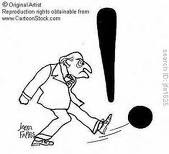 went to all those moons ago wasn't all that. When it comes to writing, everything I know today is what I have picked up through reading, practice, and through critiquing sessions in our writer's circle. I don't remember them teaching us a lot about punctuation - let alone creative writing.
One member of our writers' circle is someone I've been friends with since those wonderful days, and she agrees. She finds punctuation hard to deal with, although I have to admit she is getting better. Using the correct punctuation is just as important as every other detail of the story you are trying to tell, from the characters, their world, their dialogue - everything.
However, choosing your punctuation is an art form. Some people use a bit of everything, throwing in a bit of this, a bit of that, and maybe one of those too, where others may just prefer to use the basic full-stops and commas. And is this wrong or right? It doesn't really matter. As long as they are used in the right context, it can help to aid your story along.
But your personal use of punctuation is much like your style of writing. It differs from the next writer.
We ran an experiment last night. I was hoping that it would prove useful to those who struggle with their full-stops. We wrote a short piece in our own writing style, how we usually would, but left out all the punctuation. Then we passed it to the next person to add in where they thought the punctuation should be. Despite us getting a large percentage of it right, the added punctuation changed the original flow of the story completely. There was punctuation added in places where I wouldn't have used it. And despite them not being wrong, it was surprising how much a extra comma or one less full-stop can change the style so much.
Anyway, this was the piece I wrote with the original punctuation in.
Purgatory
The door closed. Should I have gone through it? I didn't know.
I stood and stared at the giant doors before me. They reached so high the top was engulfed in the gloomy mist above. Relief sculptures climbed the paneling, each body entwining with the next, and each with a story of their own to tell.
I looked around me, confused and nervous. Had I missed my chance? What was I supposed to do now? This was new to me, as it was new to everyone else who stood before these doors. Purgatory wasn't a place often frequented by the living.
I continued to take in my surroundings; the shadows; the mist; the pillars. The room appeared round but was somehow shapeless, and it was spacious but felt small and oppressive. And there was a ceiling. I knew that, but I couldn't see it.
What was I supposed to do now? When I first entered the room, the great doors had opened, revealing a light that was warm and tempting, but fear had held me back. As I stood and watched, debating whether to walk through, the doors had closed. Would they reopen?
Movement caught my eye. I looked up and saw as figure on the door moved. He turned his body, 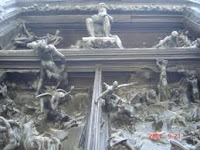 untangling himself from another figure and then turned to face me. And he wasn't the only one. The whole door was now alive with squirming bodies, all turning to face me. There was no noise, but their mouths were open, calling me and reaching out their hands.
Fear engulfed me. I wanted to step back, to run, but their hands, even though too far away to reach me, seemed to pull. I couldn't fight the force and I began to move forward. I realised then what was happening. The doors had shut on my one chance to enter Heaven. I was stuck in purgatory, and those who entered before me were the figures on the door. As I was pulled closer, I knew my fate now lay with them for the rest of eternity.
Posted by DRC at 06:29