Wow! What a week I've had. If you happen to work for an Internet company and they come up with the bright idea of working from home, make sure you - AND they - think it through good and proper before taking that leap.

Still, hopefully now everything should settle and life can start to resemble something that was once considered normal.

For today I thought I'd blog a little something I wrote last night during our weekly writers' circle meeting. We were given three random words and basically we had to come up with something that involved them all. This is what I churned out.

She couldn't see me. I was invisible to her, just as I was to everyone else. For neigh on 50 years I had been trapped in my own purgatory, free to roam wherever I pleased, but doomed to do so alone. Despite often being surrounded by people, no one ever knew I was there.
I was a ghost - once a man who's life had been stolen from them at the age of 31. I had the chance to move on then, to follow the path that opened to me, but things had happened so fast and so unexpected that all I could do was turn and run. I was frightened and

didn't know what was happening. Now I regret not taking that unknown step forward.
It took a while, but I soon become accustomed to my new existence, and I took to sitting and watching as society evolved and grew. It comforted and soothed me to see people come and go, blissfully unaware of my prying eyes. And I'm sure that my eyes were not the only ones watching - but I had never seen these.

Tonight, something was different.

Tonight she had an aura about her, an aura that heightened her senses and made her more open to my presence.

Tonight she knew I was there.

The first time I saw her, I was engulfed with emotions and feelings that I hadn't felt in over 50 years. They enthralled me and she enthralled me. I had never met anyone like her before, and suddenly I was longing to be alive again, to be able to touch her, to feel the softness of her blonde hair running through my fingers, to smell her sweet scent, and to experience the warmth of her breath on my skin. I wanted all the things any lover would want - but I was denied.

I watched her work; I watched her cook; I watched her relax, and I watched her sleep. I wanted her so badly it hurt.
Tonight was different. She huddled on her bed, quivering, feeling my presence in her room. I meant her no harm, but she didn't know this. She was only aware of something she didn't understand, and this frightened her. Wanting to calm her, I leaned on the bed and gently reached out my hand. I had never attempted to touch her before, but as I said, tonight was different. As my fingers touched her chin, my palm brushing her soft skin, I expected to feel her. I wanted to feel her, and felt shocked and surprised when I didn't. Why, I didn't know. I hadn't felt anything physically since I died.

But she felt me.

Her eyes widened and within an instant she had lurched towards the other side of the bed. She was terrified, and I had done this to her.

I was grieved by this revelation so much. I didn't want to frighten her. I loved her. But seeing my affect only made it clearer in my mind what I had to do. 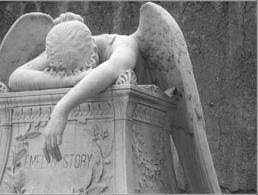 I loved her too much to succumb her to anymore fear.

Turning, I faded into the shadows, leaving to go back to my loneliness, and as hard as it was, I refused to look back.
Posted by DRC at 09:25