Mummy, Where Do Dragon's Come From? 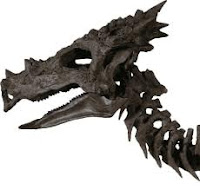 Look at this skull; what do you see? I see a Dragon. I see horns on both its beaked nose and above its eyes - and I'm not the only person to see this. This skull could be the connection between myth and reality. This is, in fact the skull of a Dinosaur - a Dracorex Hogwartsia (named - for reasons I'm not going to look up - after the Harry Potter series. Oh yeah, fact!).
The thing is, this beast could have been around with our early ancestors, thus creating a time when people did, in fact, roam with dragons. Back then, as the stories past verbally down from generation to generation, they grew with intensity; fact became exaggerated, then become a legend, followed by a myth - a time when dragons roamed the earth.

And lets face it, if an ancient Egyptian stumbled across this skull, they wouldn't exactly say, "Oh, that's a dinosaur fossil." No, it would fuel their mythological beliefs.

Take, as another example, the ancient Greeks, a civilisation famous for its unique religious views and legends. One famous mythological creature was the cyclops, a huge one-eyed beast. Where did this come from? Well, the remains of giant mammoths apparently scatter across Greek and neighbouring lands. One theory is that the Greeks stumbled across many of these skulls and, not knowing what they were, saw them for what they looked like, mistaking the huge nasal cavity for a single eye socket, and thus creating the legend of the cyclops.

Also, Greek legends are filled with creatures and gods that could turn people to stone, such as Medusa. As everyone knows, after several million years of lying in rock, dinosaur bones become 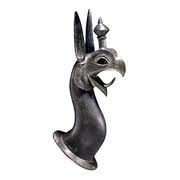 fossils, ie stone. What if the ancients Greeks saw this and their only plausible theory was that they were turned - just like the kraken?

There are many people out there who are trying to connect Dinosaur fossils with myth, and another one that has them hungry is the Triceratops. Could a member of its family, with their beak nos 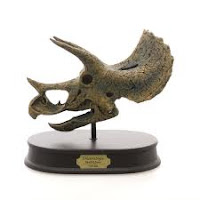 e, have given birth to the legend of the Griffin? And could some ancient discovered fossil have fueled the Chinese dragon myth?

It's a plausible concept. Stories and pictures become like Chinese whispers through time, and the creatures of myth that we are seeing today could have once been born from the discovery of dinosaur remains.

This subject really interested me this week, and as a writer I thought it was a great tool to consider when world building. If your world, like the ancient Greeks, is full of colourful, fantastic myths and legends then it may also help to understand where these stories originated from, giving your world a sense of depth and time. Just where do your dragons come from???
Posted by DRC at 08:37