This piece was written a while back as an exercise for our writers' group. I can't quite remember what the in's and out's of it were but I know it had to include the sentence:

This is what I churned out. 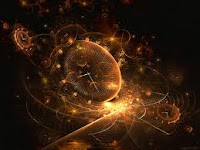 Time travel. So many people had been warned of the consequences of messing with time, but of course the advise was never listened to and the price was always paid.

I had always considered myself as someone with their head firmly attached to their shoulders. I was smart and sensible. Time travel was something I would never mess with - but that was until I met the hand of temptation.

I stared at the photo - the one thing left I held close to my heart. To my relief it still looked the same. The family - my family - who stood in front of the log cabin looked happy and excited, and I remembered back to when the photo was taken.

We had inherited the log cabin two years ago, although to say two years ago now would be an error as the booking wouldn't take place for another hundred years - at least. The location had been my parents favorite, with the picturesque scenery and the mountainous backdrop, and it had been a holiday to remember.

It had been our last holiday to together.

"As long as the picture remains the same, you will be okay," had been the last advice given to me before I left. Now every second I got I was staring at the picture.

My actions in the deep past had not yet affected my present, and my heart slowed with relief in my chest. Whole families had been wiped off the planet because of simple careless actions and irresponsible decisions. I didn't want to be one of those, the cause of something like that happening.

﻿ ﻿ But it had happened, and it had happened fast - too fast for me to realise. Suddenly my spontaneous actions in response to what was happening was wrong. They were the kind of actions that would bring consequences to my family. I continued to run every event over and over in my head for some speck of hope that I might be saved, but I couldn't see anything. The only reassurance I had that my actions hadn't been disastrous was my photo - but as I looked it began to change before my eyes.

And as I watched, the mountains in the background began to fade away.

I wanted to cry but I felt numb. There was nothing I could do. Within minutes my family would be erased from existence . . . and I would fade with them.
Posted by DRC at 10:59