I'm sorry. I told myself that I wasn't going to do this but I just can't help

Ever since I drew that picture of the X-men for a friend of mine (it was huge! One of the biggest things I've drawn for a long long time) I've suddenly developed a little obsession. Not so much with the graphic novels - I haven't got that far - but with the characters themselves and the art behind them. When I first started the picture, I knew who Wolverine and Storm were from the films, I vaguely remembered Beast from childhood cartoons, but I had no idea who Gambit was. So I done a little research (it's always good to know what you're dealing with) and read this whole back story that was fantastic. I loved it. If they haven't already, someone should write a novel.

Anyway, it turns out that two of my favourite characters are Gambit and Rogue. They have this chemistry between the two, and Rogue is, well, Rogue, and Gambit is a swarve, charming thief that you just really want to trust. He's got that edge, you know, the bad boy that every girl wants (or some anyway).

I suppose, seeing as Marvel have been dealing with mutants since . . . 1965 ish, give or take a few, each of the main characters - even some of the secondary characters - are so well drawn out that every little detail about them is known. Wouldn't you just love to know your own characters that well. And wouldn't you just love that at some point in the future, someone would create a collection of art based on your work and your characters. I think that would be fantastic.

Anyway . . . despite the fact that I wasn't going to go down this route, I'm assuming you've already guessed what the theme is for this week's Pic of the Week . . .

Enjoy and have a Marvel-ous weekend (Ha! Boom boom!) 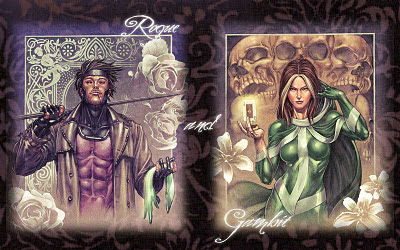