Before I start, I completely forgot last blog to tell you all that I've been interviewed by a fellow blogger. I was planning to let you know in my previous post but ended up rambling so much that I forgot. So my thanks and apologies to Nephy. Here's the link to her interview.

I'm still going to stick with the subject of Vampires this week as I'm still feeling puzzled why New Orleans plays an important role in the modern Vamp world. I'm blaming all this on Anne Rice, of course.

Anyway, I thought I'd deviate somewhat to the folklore of vampires - the REAL vampires. These date back to medieval Europe. People were paranoid back then. They didn't understand the sciences and believed that everything happened for a reason. If crops failed they blamed the last dead. If someone fell ill, they blamed the last dead. They believed that they rose after death to cause pain and suffering to others. This often resulted in them being dug up.

Back then, a horrible fact, a lot of people were buried alive. Medical knowledge wasn't available to many, and those who were mistaken to be dead often woke to find themselves in coffins. This has been proven by scratch marks found on the coffin's lid, caused by frantic clawing (something that often damaged the ends of the fingers too) and by remains discovered in odd positions where they had moved. If this was found hundreds of years before the only explanation would be Vampire. People often went to great lengths to stop the undead from rising. One was to stake them in their coffin, pinning them down to prevent them rising; another was to place a wire (or substitute) across their neck so that if they were to rise they would instantly decapitate themselves.

Another was to place a rock in the mouth of the dead. This was supposed to quench the vampire's thirst. I happened to fall upon a random blog post that explained a visit to Venice and the island of Poveglia which is over-run with decaying buildings and legends of ghosts and ghouls. Mass graves have been discovered on the island dating back to the days when the plague was in full fury.

It wasn't uncommon for mass graves back then to be reopened for new bodies, and when this happened, previous bodies were often found bloated, still full of blood and a hole in their covering shroud by their mouth. Instantly it was believed they were vampires who were eating at the material, when in fact it was normal decomposition and bacteria in the mouth that ate at the material. But still many remains were discovered with rocks placed in their mouths.

The legend of vampires have been with us for centuries, but it wasn't until the days of Bram Stoker that vampires were born into the world of fiction. No longer do we believe that things happen because of the last dead; no longer do we place rocks in the mouths of those we believe will rise again in a bid to quench their thirst. We are now a society that acknowledges the sciences, that understands how biology works, and that believe vampires do not exist.

But they do exist. Writers throughout the decades have ensured that - and they remain to be dark, mysterious, dangerous and often romantic beings thriving in the world of fiction.

So, this week's Pic of the Week is by an artist called La Sera. This piece is called 'Vampire Bride', and the one thing that struck me about this piece is the attention to detail given to the back ground. I thought it stunning and definitely eye-catching.

So, until next week. Enjoy. 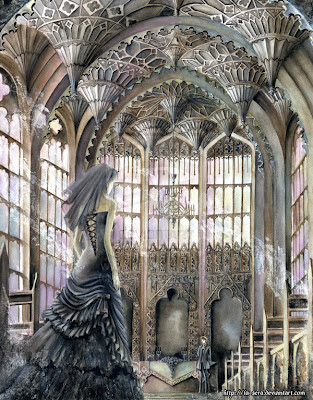