Vamping Up A Fangtastic Genre . . . 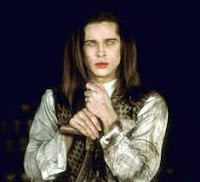 I've been surrounded by vampires just recently - well, not literally - but it seems everywhere I go there's talks of the vampire genre, or there's a vampire show on TV, or someone's blogging about them. Vampires vampires vampires. They're everywhere.

I used to love the vampire genre when I was younger. Back in 2000 I even wrote a script (later to be converted into a novel) and a group of us got together and made a film. It helped being part of an amateur theatre. I was surrounded by actors and people with the right equipment needed. We even comprised our own score for it. We were all really proud. The story line was your typical vampire plot. Old vamp makes new vamp; new vamp falls in love with girl; old vamp kills girl; new vamp leaves and swears that if ever they meet again he will kill him. Hundred years on new vamp meets girl who reminds him of old girl; new vamp and girl fall in love; old vamp returns and attacks new girl; new vamp kills old vamp, can't save girl and commits suicide.

Sounds like an okay plot, right? Wrong. As I said it's a typical plot. It's been used, used again, and then strained like a tea bag to get the last few drops out of it. The TV show The Vampire Diaries, I believe, may also be loosely based around this. The few episodes I've actually seen never persuaded me to believe otherwise.

Because of this I sadly lost interest in the vampire genre. The Undead were being killed. Then I picked up Anne Rice's Interview With a Vampire and I had to read more. Now she's one of my favourite authors. I love her vampires and they're not all stereotypical. It revived my interest for the subject.

AND then along came True Blood. I have to confess now, I'm a Truby fan. Maybe it's the whole Stephen Moyer or Alexander Skarsgard thing, or maybe it's the fact that again, like Anne Rice, I feel these vampires aren't stereotypical. Twilight, even though enjoyable, still revolves around the whole stereotypical plot of vampire falls in love with mortal girl. It does have a slight twist when the werewolves are introduced, an

d I have to confess, I like the background history that Stephenie Meyer introduces, but as Stephen Moyer said in an interview with Jonathan Ross, 'Edward Cullen is the SlimFast, Diet Coke of vampires'. With this I agree - but then Twilight is aimed for teenage girls (and in no way am I cussing the actors themselves).

So anyway, I've decided to revive my interest and write a vampire novella. The story line has been brewing since the days of us filming but I've never taken that step. Now I feel I have to. Vampires are calling me. Can you not hear them? This one, I hope, will see the return of dark vampires, to remind people that these are supposed to be predators. Maybe it might even reach Starfish PC's second launch in June.

Oh, and one last thing before I finish rambling: What is it about vampires and Louisiana? New Orleans seems to be the vampire capital of the world. Is this something that has been set in concrete since the days of Lestat and Louis or have I missed something...
Posted by DRC at 09:03