Routing through some of my old writing, I come across one of my old novels

written in 2001 and couldn't help but smile. It is a typical, cheesy vampire story called 'Undying Love'. Back then I was doing a lot of work for the youth group of a local amateur theatre, and we come up with the great idea of making a film.

Of course this had to be a vampire flick.

So I come up with the story line and script, we cast our movie, knew the right people with the cameras and editing equipment, lights, music, etc, and we filmed it. It was, basically, one of the best times of my life. I loved making this film and we had so much fun.

So after it was made, I decided to rewrite the thing as a novel. It's the usual vampire falls for girl, vampire friend kills girl, vampire vows revenge etc. 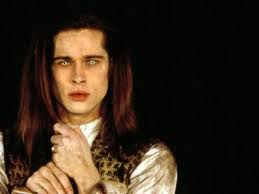 I don't think I'll ever write Vamp Lit again. I used to love anything vampire, but when it came to films I was fussy. I like classy vampires, and I think it's really hard to make a classy vampire flick without it being cheesy. 'Interview with a Vampire' wins hands down for me. And the books are just as good. I love Anne Rice. She's one of my favourite authors (and her son, Christopher Rice, isn't too bad either), but now a piece of Vamp Lit would have to be something really special for me to pick it up.

But at least I can say I tried it, I wrote it, but it wasn't for me. Yep, the manuscript, 'Undying Love' is one for storage.
Posted by DRC at 13:17