On This Day, December 9th 1965 the Kecksburg UFO Incident occurred. A huge fireball was witnessed by thousands as it passed over at least six U.S states before presumably crash landing in Pittsburgh. Of course, eye-witness accounts tell one story and official accounts tell another. Who knows what the object was.

But because of this, I've decided today's Pic of the Week should be space themed.

I'm so intrigued with the wonders of the universe. What's out there? Is there life? No one knows. But the recent discovery of Earth-like planets is slowly leaning the argument towards the 'yeeeeaaaaahhh...there could be' side. I believe there is. There's so much going on out there that I find it hard to believe we are the only inhabited planet. I'm not talking 'little green men' who like to abduct people and stick probes...in places, just the idea that somewhere out there in the dark yonder is another planet with content little beings blogging away - or maybe not.

Anyway, today's Pic of the Week isn't the usual work of art I normally post. It's a photo of the Carina Nebula taken by NASA back in April 2010 and displayed in their Astronomy Picture of the Day gallery. I think this is amazing, and the idea that it's still brewing up there is phenomenal.

Check out their Website for the scientific jargon that goes with it.

In the meantime, enjoy and have a fab week. 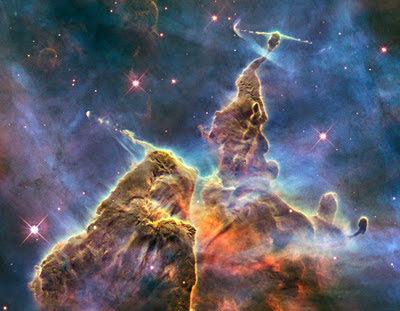