I was struggling for a theme for today's Pic of the Week, so I thought I might introduce an 'On This Day' theme, just for those Fridays when I'm stuck. Today is just one of those days - so here goes with the first 'On This Day'.

It was on this day (December 2nd) in 1804 that Napoleon Bonaparte crowned himself Emperor of France, the first Emperor France had seen in a thousand years. Now, Napoleon isn't the inspiration for today (don't panic), but the Cathedral of Notre Dame, the place where he crowned himself, is. This reminded me of the Disney film 'The Hunchback of Notre Dame'.

I admit, I'm a sucker for Disney, and the 'Hunchback' is one of my favourites. The whole Gypsy culture from it actually inspired a hell of a lot for my last novel 'Kiss of the Gypsy'. It's got a lot to answer for.

Anyway, I've just discovered that the film - even the ones made as far back as 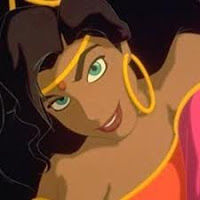 the 1960's, is completely different from the original book written by Victor Hugo. Apparently (and don't take what I say as gospel. I haven't read it) Esmeralda is hanged at the end and Quasimodo then lays next to her body, refuses to leave her and starves to death. It's all very tragic - and a far cry from Disney's happy ending.

So, today's Pic of the Week is a piece inspired from the film. What drew me to this picture is the bold colour that surrounds Esmeralda and her gypsy life, as opposed to the dullness of everyday Paris life.

And that's enough waffling from me. Here's the pic. 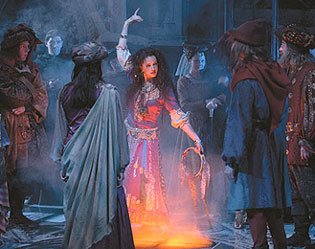