Pic of the Week . . . Tomasz Chistowski

Before we move on to Pic of the Week I'd like to thank all those who wished me luck for giving a talk about the joys of writing to my niece's class on Wednesday. It went really well. Like most of you said, the kids were interested and were completely engrossed in what I had to say.

To begin with I gave a little talk about my writing career to date; I took in the very first novel I ever wrote and was rewarded with oohs and aahs, then I compared it to one of my last novels (180,000 words and yet to be edited) and the oohs and aahs were replaced with gasps of astonishment and awe. After that my mind done a blank on me. All the points I had arranged to discuss disappeared and so we moved on to question time. I was there for an hour answering some superb questions about writing, and I could have stayed for the rest of the afternoon had the teacher not had other plans for her class.

It went really well - and my niece had a proud grin from ear to ear the entire time, bless her - and rumour has it I may get asked to come back sometime in the new year to speak with their other class of 10 year olds. I said that as long as they have questions it shouldn't be problem...lol. And so it begins... 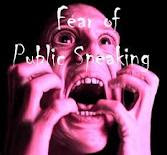 Public speaking can be terrifying for those who don't often do it, but the more you speak, the easier it gets (I learnt that from my days of theatre work). Having a low self-esteem, being self conscious about your appearence or the way you sound, such as Dark Conteur and Michael Offutt brought up, can hinder most people. I suffer with both these. I admit to be being on the cuddly side (years of sitting at a computer desk instead of working those muscles) and my voice sounds far younger and immature than I actually am. I also talk too fast, a trait that has carried through most of my family, and this often leads to me stumbling over words when nervous. These elements make public speaking very difficult, but if you remain calm, relaxed and take deep breaths, chances are you'll do just fine.

Anyway, Pic of the Week. I had a pleasent shock this morning when I woke. I looked out the window and everything was white. We had our first dose of snow this season, and that cold, fluffy white stuff has inspired this week's choice.

Introducing Tomasz Chistowski from Poland, a chance find and an artsit I'm sure we will be returning to in the future.

Enjoy and have a fab weekend... 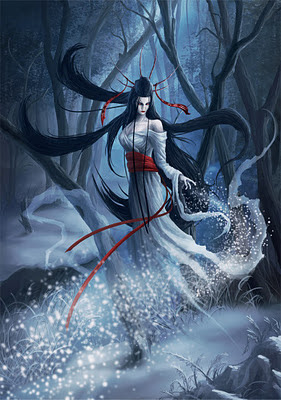